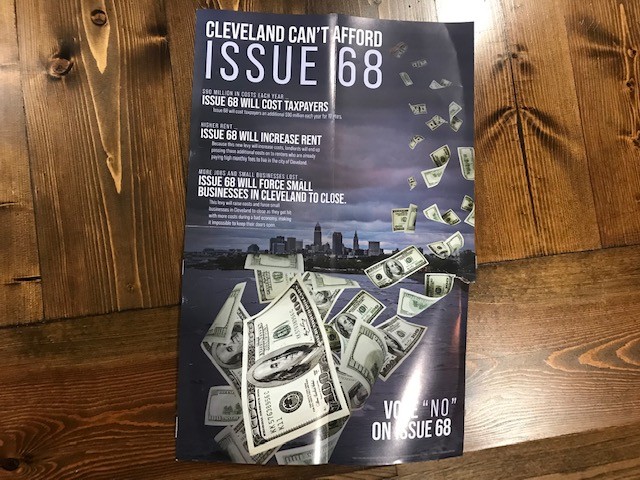 You can tell the people behind the effort to defeat the CMSD levy on the November ballot believe they are on the right side of the debate for the right reasons and not merely arguing that Clevelanders should forsake the future of public schools for a few more dollars in their pocket mainly because they have taken extraordinary efforts to shield their identities from the voting public.

Mailers arrived this month in mailboxes across the city imploring residents to vote against Issue 68, the levy renewal and increase that represents more than 12% of CMSD's budget. The group behind the effort — Cleveland's Future Fund — is an LLC that was registered with the state of Ohio in September by a law firm based in Dayton. The website — ClevelandsFutureFund.com — contains no hints as to the people behind the campaign. Nor does the address listed on the mailer, which is that of a coworking spot in downtown Cleveland.

CMSD CEO Eric Gordon has said that without the $66 million or so from the levy, Cleveland schools would be facing staggering cuts.

Since the arrival of the first mailer, and a second mailer this week and the unceremonious debut of a brief YouTube ad-spot (see below), little has been learned about the mysterious backers.

Only Crain's Cleveland has sought to unmask those behind the effort, which the scuttlebutt had pegged to downtown Cleveland property owners.

Here's just part of their first look at who is rumored to perhaps be involved and how downtown's legion of property owners responded:

Rumblings of an anti-levy effort spread among downtown real estate insiders early this month. But major property owners contacted by Crain's declined to comment on support for an anti-levy campaign.

Several sources said to contact James Kassouf, a longtime Cleveland parking-lot owner whose portfolio has grown to include the Tower at Erieview, the adjacent Galleria and buildings in the Warehouse District. In an email, Kassouf offered to "ask around" about the levy. He didn't answer specific questions posed by Crain's in emails and phone messages.

Many downtown property owners won't publicly touch the topic of an anti-levy campaign. But some high-profile landlords acknowledge that they're concerned about the economic impact of the additional 5 mills, which the district expects to put toward ongoing work on its transformation plan and new challenges, such as remote learning and digital literacy, created by the pandemic.

"The levy is crazy," said Doug Price, CEO of the K&D Group, a major owner of apartments and office buildings in the central business district. "It's no surprise there is an anti-levy campaign. Business conditions are terrible, and it's a 30% increase in our taxes."

Price wouldn't comment on whether he supports the anti-levy movement. But he clearly opposes the additional millage that's being layered atop a tax increase that voters first approved in 2012 and renewed in 2016.


(Neither here nor there, but Doug Price was also most recently in the news for throwing a hissy fit over a First Amendment-protected light display supporting Biden on the Terminal Tower, which K&D owns. If you were wondering, public records show Price and K&D are staunch financial supporters of Republicans.)

(It's also worth noting, of course, that the people who denied knowledge of the campaign or being involved but who may sympathize with the efforts, by and large, do not live in the city of Cleveland proper and their kids, if they have them, most likely either attended or attend a well-funded suburban school or a private one. But we digress...)

"We're not going to respond to this directly, because it's obviously from dark money," Mary Anne Sharkey, a spokeswoman for the levy campaign, told Crain's. "Somebody's funding this who doesn't have the courage to put their name behind it. We don't want to respond to something completely anonymous. We suspect that it's some large property owners, maybe businesspeople, who don't want to pay the additional dollars. But we don't know. We don't know who's doing it."

CMSD Eric Gordon responded directly to the scattershot but vague claims of the anti-68 campaign in a City Club forum on Oct. 1.

Those scary claims— Issue 68 Will Increase Rent; Issue 68 Will Force Small Businesses in Cleveland to Close; Think the Cost of Living in Cleveland is High Now? It's About to Get Even Higher — come with absolutely no supporting material. A WKYC article estimating the new levy would collect $90 million per year for Cleveland schools, with an average increase of only $7 a month for Cleveland households, is the only source listed on the mailer, which invites readers to learn more, without specifying where to do so. The campaign's website, meanwhile, merely lists the exact language included on the mailer.

"The literature, I would say, is really stretching the truth," Gordon said. "They suggest it's another $90 million a year when in fact 75% of the levy has already been approved twice. And that the district's not accountable... We've set up our levy on time limits, the first time Cleveland's done that, so we can prove results."

"And it's kind of exploiting the pandemic as a reason not to support schools rather than seeing all that the schools have had to do... to connect families that don't have internet. This is exactly the time to support those families that are the most marginalized."

You can watch the rest of Gordon's remarks and learn more about the reasons to support Issue 68 in his City Club appearance below or on CMSD's site here.