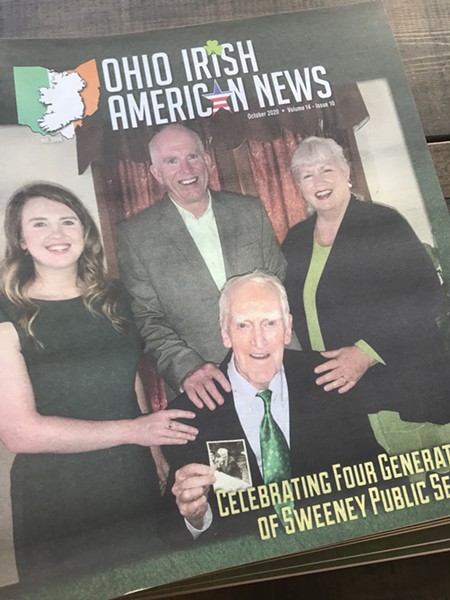 A recent bulk mailer sent by Marty Sweeney to residents of Cleveland's Ward 11 have many political insiders speculating that the former City Council President will seek office there. According to some, the mailer should be interpreted to mean that Sweeney's 2021 city council run in Ward 11 is all but guaranteed.

"It won't be official until he pulls petitions," said one county party source, "but I think the cat was out of the bag when that mailer hit. I doubt that was a coincidence."

The mailer was not about his campaign but about participation in the U.S. census, a feel-good nonpartisan issue designed chiefly, observers believe, to increase name recognition in a ward where he does not live.

When reached by Scene, Sweeney neither confirmed nor denied his 2021 political aspirations, saying that many have speculated about his next move.

"They have me running for everything," he wrote in a text. "I'm just trying to be helpful where I can." When asked why specifically he would send the mailer to Ward 11 if not to set the table for his upcoming candidacy, he reiterated that he was just trying to be helpful. "I know the importance of the census and getting an accurate count," he said.

Sweeney last ran for public office in 2018, narrowly losing to Nickie Antonio in a race for the Ohio State Senate, despite the endorsement of the Cuyahoga County Democratic Party. He served as Cleveland City Council President in what is now Ward 16 from 2006 until his resignation in 2014, appointing current councilman Brian Kazy on his way out. He was then elected to the Ohio House of Representatives, where he served until 2018, resigning so that his daughter, Bride Rose Sweeney, could run to assume his seat.

Ward 11 encompasses most of the Cudell, West Boulevard and Jefferson neighborhoods and includes small portions of both Edgewater in the north and Bellaire-Puritas in the South. Sweeney is still a resident of the adjacent Ward 16, but insiders within the county Democratic party have speculated that he might move to Ward 11 if he were to win the council race there. He might also purchase or otherwise acquire a home during the campaign to maintain an address in the ward, a tactic popular among Cleveland political candidates in the past. Others note that, seeing as the residency requirement is immaterial in the City Charter, Sweeney might simply keep living in Ward 16.

Sweeney is a career politician, and has been dogged both by a sexual harassment settlement in 2007 and the persistent whiff of ethical misconduct, including ties to the chief players in the 2008 county corruption scandal.

Sweeney's name had been one among many that local politicos bandied about as potential mayoral candidates in 2021. He has reportedly decided against that move and cast his gaze on what are thought to be contestable seats on Cleveland's largely white west side, where his Irish back-slapping still goes a long way. He was reportedly considering challenging Charles Slife in Ward 17 as well, but believes Brian Mooney is a more vulnerable candidate. Both Slife and Mooney were appointees by outgoing council members in the previous term, (Martin Keane and Dona Brady, respectively).

Mooney, when reached by phone, told Scene that he "absolutely" intends to run to maintain his Ward 11 council seat in 2021 and believes, with support from Dona Brady, who is still the Democratic Party ward leader, that he is more likely to win the party's crucial endorsement. Mooney said he was "intrigued" by Sweeney's potential candidacy and by how he'll spin his prior baggage to Ward 11 voters.

Like others, Mooney received the census mailer and chuckled at Sweeney's absurd pretense about just wanting to be helpful. He also noted Sweeney's appearance on the cover of this month's Ohio Irish American Times (photo above), another possible tactic to increase his visibility after a few years out of elected office.

'This is Marty Sweeney," Mooney said. "Everyone knows what's going on."