The FDA Tweaked Its Policy on Gay Men Donating Blood. Discrimination Still Runs Through Its Veins 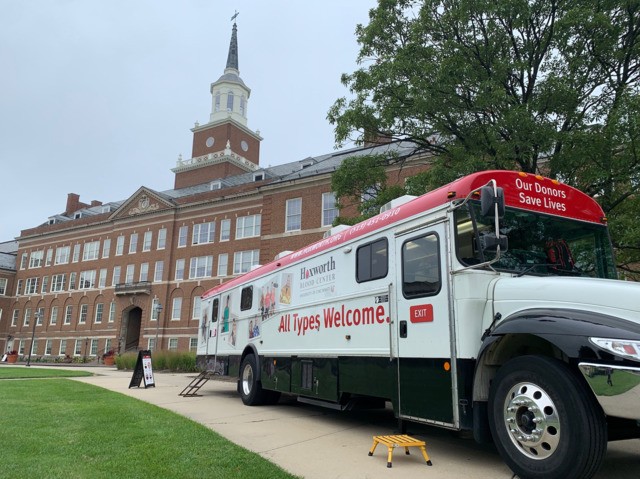 “We all bleed the same.” Those were the words displayed on the stack of postcards that debuted in August at a blood drive hosted by the Hoxworth Blood Center at Cincinnati’s Music Hall. Each card’s front showed a rainbow and watercolor design, while, on the back, it described the system of discrimination that effectively bans gay and bisexual men from donating blood.

That policy, enacted by the U.S. Food and Drug Administration (FDA) in 1985 at the height of the AIDS crisis, entered the spotlight this year as coronavirus shutdowns canceled hundreds of blood drive events, leaving hospitals and blood banks critically undersupplied at the very time when they needed vastly more blood, not less.

In April, as it responded to the “urgent and immediate” need, the FDA announced that it had changed several screening policies in order to boost blood donations. One change reduced the number of months a prospective male donor must abstain from sex with men (often referred to as “MSM”), from 12 months to 3 months.

And while a Hoxworth spokesperson tells CityBeat the blood bank has yet to see an increase in donors related to the policy change around men who have sex with men, Josh Neumeyer — who in 2014 organized a Gay Blood Drive with Hoxworth as part of a then-national campaign to encourage the FDA to revisit the policy — argues that the agency continues to sidestep the ban’s essential incoherence.

“They're still not addressing the root issue of all of it,” he says of the policy update, which, he notes, didn’t so much “unban” gay men’s blood as it did reduce the length of abstinence required for MSM donors.

From an early age, Neumeyer noticed his mother donating blood regularly. It made an impression on him, and he started donating blood after he turned 17.

“That was all well and good, until I came out,” he says. “I understood that was not going to be possible if I was sexually active.”

The policy has no verification component, and therefore puts gay men like Neumeyer into the bizarre position of being the enforcers for an unscientific policy that doesn’t target potential health risks, but their own sex lives.

“The evaluation of my eligibility is not based on the risk that's part of my life,” he said, pointing out that HIV is simply not a “gay disease,” but one whose risks, prevention and detection are today far better understood than they were in the 1980s.

“Like it or not, I understand the reasoning behind it — they didn’t have an understanding of what was happening,” he says. “If I'm having sex but doing so safely, there's as little risk of me contracting HIV as there is for any heterosexual couple.”

But even in light of the policy’s baseless targeting of gay men — and the fact that all donated blood is tested for HIV and other pathogens — Neumeyer says he’s never been tempted to misrepresent himself in order to donate blood.

In 2014, the “Gay Blood Drive” he organized wasn’t a protest or a literal act of public defiance: The donors were still screened with the FDA’s policy at the time, which imposed a lifetime ban for anyone who had sex with a man after 1977. Neumeyer could only organize and advocate from the sidelines.

In 2015, the FDA ended that lifetime ban and replaced it with a 12-month condition of abstinence from sex with MSM partners — regardless of the prospective donor’s actual health status or their degree of monogamy. But it still opened the door to gay men like Neumeyer, who was able to donate blood for the first time in years.

Although the FDA released its updated guidance in April, the paperwork reflecting the policy for MSM donors was only finalized by the FDA last month. In an email to CityBeat, Hoxworth spokeswoman Alecia Lipton confirmed that it has been using the new forms since August 31.

“We have not yet seen an increase in the number of donors resulting from this policy change,” Lipton wrote. “We do anticipate that the numbers will grow as more and more people become aware.”

Among the changes, Hoxworth also adjusted its screening process to allow trans donors to fill out their paperwork “as their self-identified gender, rather than their gender at birth.”

In the email, Lipton cautioned that the ongoing blood shortage shows no sign of ending soon. She noted that closures of high schools and the prevalence of remote learning has upended previous plans for blood drives on school properties and college campuses.

And although Hoxworth has advocated for the FDA to revise its policies on MSM blood donors, Lipton pointed out that its hands are tied: “As a regulated organization,” she wrote, “we cannot unilaterally enact changes concerning the MSM deferral policy.”

These same blood donation policies apply to those who wish to donate plasma, including convalescent plasma from those who have recovered from COVID-19.

That leaves Hoxworth and prospective blood donors in a familiar position. Even with a three-month abstinence window, gay and bisexual men are still being asked to balance their personal lives, their relationships, their partners, with a chance to help save lives. As Hoxworth and gay men like Neumeyer contend, it’s an unnecessary barrier — and a doubly senseless one at a time when blood donations are at critical levels.

That’s why Hoxworth will continue to leave the “We all bleed the same” postcards at its neighborhood donor centers and blood drives. Neumeyer recalled seeing people who arrived to the blood drive in August “specifically to sign those cards,” as they still aren’t eligible to donate blood.

Hoxworth is sending the cards to the FDA, but for now, the policies of decades-past remain thicker than present-day science. The situation leaves people like Neumeyer still hoping and waiting for the FDA to fully revoke the discriminatory practices.

And until then, he’ll abide by its rules.

“Personally, for me, it’s an issue of ethical integrity” he says. “Even though I don’t agree with it, and I don’t understand why they exist, my choice is to respect the fact that they do.”

Originally published by our sister paper, City Beat in Cincinnati.