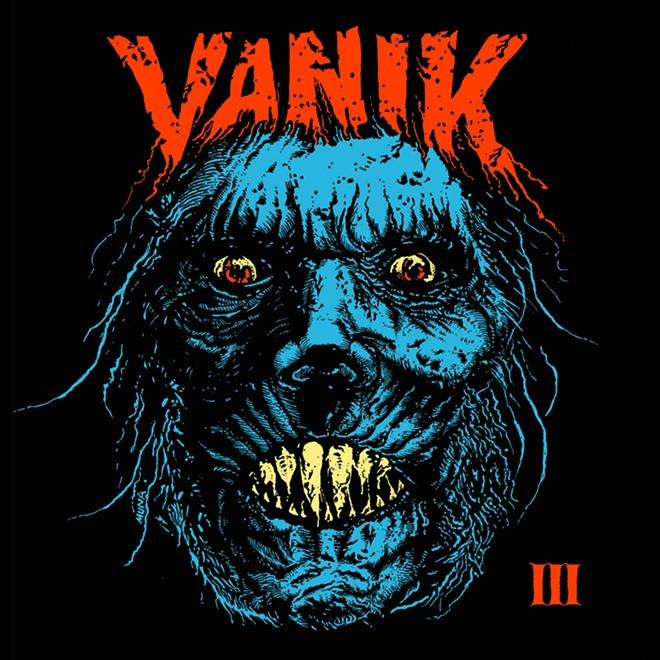 A session musician, studio owner, and a live guitarist for the Cleveland-based metal band Midnight, Shaun Vanek is also the face—and the voice—behind VANIK, a horror-infused music project.

“Let's be real: Halloween is—objectively—the best holiday,” the guitar phenom says in a press release about his band's latest album, VANIK III. “Still, the last decade or so has left me wanting more from the season's music. While traditional spooky-sounds — the ones featuring creaking staircases, hollow moans, and virgin screams — are great, I've always envisioned a reality where autumn's soundtrack has a bit more flare. I wanted — no, needed — something that got me looking forward to every fall... something rife with detailed Halloween imagery... something that allowed me to escape into my very own Halloween world.”

Shortly after forming four years ago, VANIK issued its self-titled debut, and in 2017, VANIK made its first live-stage appearance. The band played two sold-out shows, one in Cleveland and a second in Toronto. When performing, VANIK puts on an elaborate, theatrical show complete with stage props and intricate lighting effects.

Known to personalize each release with unique twists such as Halloween masks, decorations, and posters, the multi-talented Vanek makes the extras by hand.

Vanek says 2020, a dumpster fire of a year that “feels like a never-ending horror movie,” inspired his approach on the album, a showcase for his remarkable guitar skills.

Unable to tour because of the pandemic, the band taped a live show from its rehearsal space to celebrate the album's release.