Jake Kelly’s Latest Comic, “Shadows Will Fall," Digs Into Cleveland's Past With the Stories of Fred ‘Ahmed’ Evans and Marlene Steele 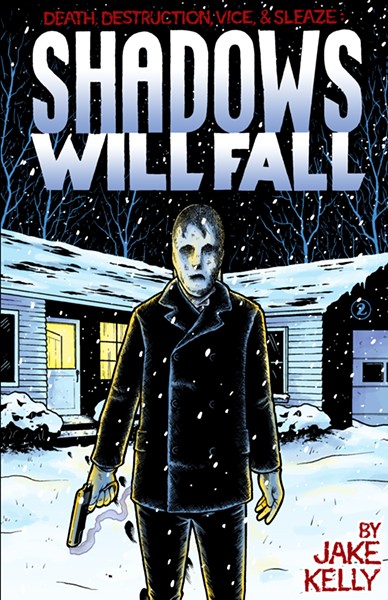 The series takes the depravity of Cleveland true crime history and retells it through the art of comics in a way that only Kelly can.

The episodic true crime series takes the reader on a journey through annals of Cleveland history and shines a light on some of the most outrageous, intriguing and deplorable human acts in Cleveland’s past.

“Shadows Will Fall" is a line from Cleveland folk artist Tedd Browne’s final song, which he composed just prior to his tragic murder.

“It seemed like an appropriate sort of line for where I’m going with this, heading into such a darkness of the 1970s that was Cleveland,” says Kelly. “A lot of shadows fell across the city in various places. There weren’t a lot of bright spots.”

In this book we are introduced to three main story lines: Tedd Browne, Fred ‘Ahmed’ Evans and Judge Robert Steele and his wife Marlene Steele. It is not, however, revealed how these characters end up being connected, yet Kelly promises, “There are conclusions to every question left unanswered in this issue.”

Tedd Browne was a folk singer who received a fair amount of fanfare in the 1960s and sang at Lyndon B. Johnson’s inaugural ball in 1965. His life was ended at the age of 38 in Cleveland Heights one night on his way home when he was murdered under mysterious circumstances.

There is a creepiness to this issue which is reminiscent of the show The Twilight Zone. This is reflected in the tone of the narrator as the story unfolds and the Cuyahoga River is used as a narrative device as it was in the first issue, “Doomsday Map,” which was released in May of this year.

“The first issue was sort of an introductory 'explosion issue' let’s call it, and this is where I’m starting to lay the groundwork for all of the future stories,” explains Kelly. “They’ll all be pretty well self-contained, I’m going on the marvel comics’ saying of any comic that a kid picks up might be his first issues so he’s got to be able to understand everything that’s going on.”

No comic has ever made me feel as creeped out as this one. Kelly has truly mastered the art of dark and disturbing. As with ‘Doomsday,’ the way in which Kelly chooses to zoom in and out of the story makes one feel as if the narrator is telling the tale from the bowels of a pit of despair or worse. With lines like, “I’ll tell you about the heroin, the glue, the speed and the booze. I’ll tell you about all of it, but it will have to wait for now,” it is no wonder this issue leaves us nail-biting on the edge of our seats and thoroughly disturbed.

Kelly’s works have always exhibited a fair share of macabre but these stories find him nestled cozily on the darker side of things.

“I think there is sort of balance between the journalistic approach and the Rod Serling narrator approach, and it’s a work in progress so I may trying to find my footing between those two worlds,” says Kelly.

We are introduced Fred ‘Ahmed’ Evans, who was a Black Nationalist in the 1960s. After serving in the Korean War where he experienced a head injury, Evans returned to states to find himself in Cleveland in the political climate from which the Hough riots manifested. In the summer of 1968 there was a gunfight between Evans' crew and the Cleveland Police which raged on for hours in the Glenville neighborhood, sparking the Glenville riots.

We are also brought into the terrifying tale of the murder of Marlene Steele, mother of two and wife of Euclid Court Judge, Robert Steele. The cryptic nature of her death is so expertly portrayed in the comic, I will leave it to you to read “Shadows Will Fall” to guide you through the horrifying injustice.

Kelly claims he has stacks of research around his studio for these and future stories. “I have a broad outline for about twenty issues and I’ve got several other and there is definitely some unsolved mysteries in there that I do have my own personal pet theories. As to whether I will advance those remains to be seen. I don’t know how crack-pot I want to get,” says Kelly.

He has gone to the lengths of painting a 9’ x 15’ ‘doomsday map’ mural on his wall of Cleveland annotating where all of these repugnant acts have occurred. I am not sure where Kelly draws the line between crack pot and aficionado, but he jokingly comments that maybe when the comic is finished he could get a job as an adjunct professor of “weird Cleveland history” somewhere.

Kelly plans to crank these issues out at a rate of about one every three or four months. As debauched as the past two issues have been, it would seem Kelly has not lost his sense of humor based on the title of the third issue, which is entitled “Fifi Fondue and Her Pet Gorilla.”

The fourth issue will be about a biker gang double homicide.