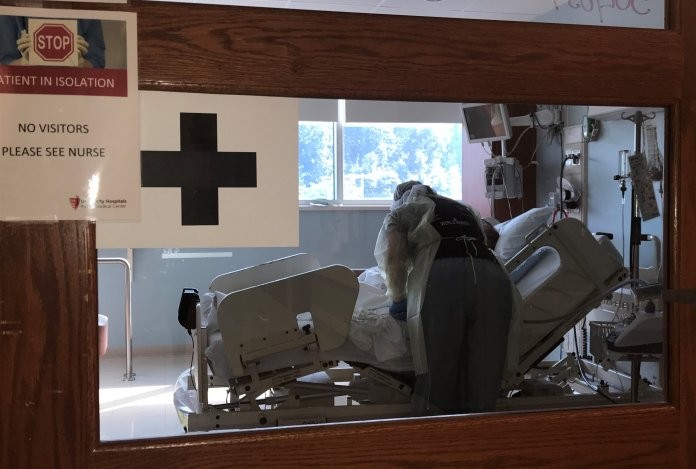 While Cuyahoga County remains at level 3/red alert on Ohio's statewide public health advisory system and is no longer on the watchlist to go to level 4/purple, Gov. Mike DeWine today announced a statewide record for new cases and a call for the creation of county-level COVID Defense Teams to address the problem.

Cuyahoga was one of three counties that officials had guessed/feared would head to level 4 today after a sustained period of increased cases and hospitalizations.

But there were 3,590 new cases today, by far and away the highest daily total reported since the start of the pandemic. (Ohio has never had more than 3,000 new cases in a day.)

There were also 194 new hospitalizations reported, the third-highest ever. DeWine noted the five highest statewide hospitalization numbers all happened in the last two weeks.

Repeating much of what he's said since the spring and following his hands-off approach at the state level, DeWine politely but sternly said we all must work together and announced what he expected from the county-level COVID Defense Teams, which he expects will include county commissioners, health commissioners, hospital leaders, mayors, religious leaders and other local leaders.

The tasks will be to inventory assets, assess information, and design specific steps to "turn this around."

"All of us have to come together to fight this enemy," he said. "We have the tools to beat this virus back. We have to get back to fundamentals."

While the state will begin outreach and meetings on that front in the coming weeks, DeWine implored each county to begin work quickly.

No county has flipped to purple — indicating "severe exposure and spread" where residents "should only leave home for supplies and services" — since the state introduced the system earlier this year.

While there are no state-mandated shutdowns or new policies associated with the level 4 alert, government offices, school districts and other entities have been making operational decisions based on the county's current alert level and may alter plans if the status is escalated.

"I want to make this very clear to people: We do not have any intention if these counties go purple of issuing any kind of particular orders," DeWine said this week. "It really is going to come down to each community taking charge and pushing back agains this virus."

DeWine has repeatedly said he doesn't want any further shutdowns, but on Tuesday he warned that further interruptions may come unofficially or through local orders if the infection trajectory continues unabated.

"If we do not fight in that way, we will, one way or another, be shut down," the Governor said.

The warning comes after a full week where DeWine and local health officials have been raising alarms over distressing recent trends.

"This growing spike in #COVID19 cases is very concerning. Congregate settings and social gatherings in close proximity, both inside & outside, are high risk," Cuyahoga County Health Commissioner Terry Allan tweeted on Monday. "Masks & social distancing are essential. Remote work helps. These are ways we can take care of each other."

DeWine, meanwhile embarked on another tour of the state to politely admonish residents for behaviors that have led to the increased spread — informal social gatherings.

"These seem like innocent events, but we're seeing a lot of spread in small gatherings like retirement and birthday parties, bonfires, indoor movie nights, sleepovers, bridal showers, and family get-togethers," DeWine said on Twitter Monday. "What's so dangerous is that some people are carriers but don't know it."

While admitting that spread obviously has happened in workplaces, restaurants and other settings, DeWine today said, "A big component part of us this according to front-line people dealing with this every day are the informal events, the big spreader ones — funerals, weddings, big get-togethers."

In conversations with local health officials across the state this past week, DeWine emphasized basic precautions that have been oft-repeated since March.

"He was encouraging us to continue to message more than ever the importance of wearing masks, social distancing, washing your hands, sanitizing, being prudent,” Armond Budish told Channel 5. "I don’t know that I can say that anything that was new or startling, it was more of emphasizing what we know, I think most of us know but have seem to forgotten over the last few months. Thanksgiving is a wonderful time for family's get-togethers — do it by Zoom. If you get together in person, you’re creating a risk, that’s what the governor is worried about.”

"The decisions Ohioans make every day will determine what kind of winter we have," DeWine said today.