In Advance of This Week's Shows at Hilarities, Mark Normand Talks About Comedy in the Age of COVID 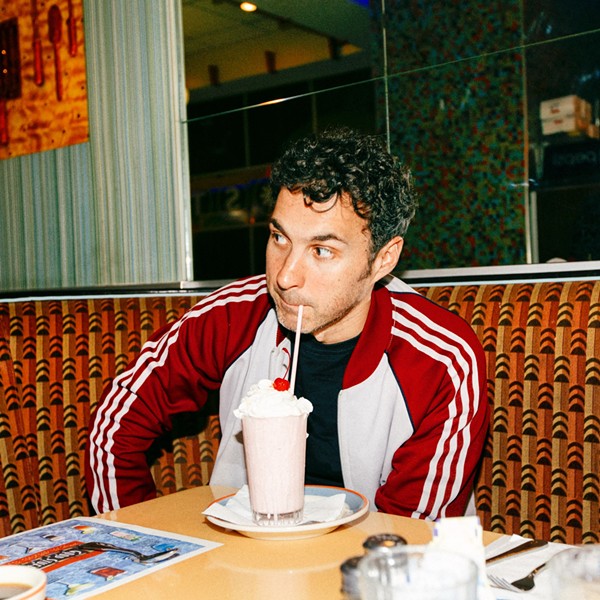 Comedy in the time of COVID is persistent, weird and keeps happening just about anywhere it can, and that’s because, as Mark Normand explains in a recent phone interview, “comics are like sewer rats; we keep adapting. We just kinda make it work.”

Getting a little taste of normalcy, Normand — who has been named Comedy Central’s Comics To Watch and maybe even more impressively, has been knighted as Jerry Seinfeld’s new favorite comic — performs socially distanced shows this week Hilarities at 7 p.m. on Thursday and at 7 and 9:30 p.m. on Friday and Saturday.

Normand’s been documenting this very weird year on his YouTube channel — hilariously showcasing his daytime outdoor shows in parks (a bit he calls Park Normand) on rooftops (Mark Roofman) and in a hotel he dubbed Hotel Normand.

It’s certainly bizarre seeing professional comedy happen anywhere outside of a dark, boozy club but luckily Normand isn’t afraid to capture the strangeness and manage to make it funny.

“It’s weird and odd and eerie, but that’s why I’m filming all of it,” he says. “I just wanna show people like…look how crazy this is. This is what we’re doing now in comedy and it’s so silly.”

Of course, when shutdowns first took place all over the world earlier this year, entertainment swiftly went digital, making Zoom not only a conference call tool but a place to get a little fix of music and comedy. Normand says the streaming shows sucked at first, and he compares them to shitty phone sex.

“You do what you gotta do,” he says. “Standup’s one of those things where, if you don’t do it, you lose the muscle. So even if you do a Zoom show — which is kind of like lifting a one-pound weight — it’s better than nothing.”

At first, streaming shows didn’t really provide comics with live feedback, which is, of course, major in comedy.

“You couldn’t hear any laughs, and it was awkward and weird. The timing wasn’t there and there was no intimacy,” he says.

Luckily, the technology got tighter as time went on and people got a bit more creative, making streaming shows as close to club performances as possible.

“Some guy did one at his apartment,” Normand says. “He would project all the Zoom faces on the wall, and it was almost like a real audience and you could hear laughter. It was like a regular show again. So just like everything else in these weird times, it got better and better.”

“They still suck,” he adds.

An upside to streaming though, Normand points out, “You don’t have to leave your apartment, but it is weird to bomb at your house.” With some clubs like Hilarities open at limited capacity, it’s a great chance to get those pre-COVID style laughs in. But depending on the crowd, Normand says performing in front of smaller audiences can be tense.

“There’s something weird about comedy where if there’s a small crowd, the crowd is very aware of it and therefore they’re self-conscious and they can’t laugh. It’ll be a funny joke and you’re like, ‘why wouldn’t this make five people laugh? It [usually] makes 50 people laugh,’” he says.

“If you’re the only one there, it’s awkward,” he says. “But if there’s 20 people banging, it’s gonna be a little more fun.” Makes sense.

The appearance, although brief, was so intentionally tense and funny, he later discussed it at length on the Jim Norton & Sam Roberts radio show, breaking down each cringey but wonderful moment. He laughs when the clip is brought up on the phone and says it actually worked out great for him.

“We sold out after that. Those shows never work but that one actually bought some seats.”

“The irony is they want you to be funny,” he says, “but you can only be funny if you just totally trash the thing and don’t take it seriously.”

That’s exactly what he did. He kicked things off with a bit about farts and by the time he mentions his preference for snorting Viagra, the segment is quickly wrapped.

“It’s a weird situation for [morning show hosts] because they’re used to talking to these normal, regular, by the book people and comedians are usually off the wall and weird and irreverent,” he says. “So, I do a million of those and I just said with this one, ‘I’m hungover, I’m annoyed, I’m just gonna be myself’ and it clicked.”

This just-being-himself method is actually how Normand has pulled off his career so far. He had decided to give comedy a real shot after failing out of three colleges, explaining that he was “completely rudderless” after having tried every job in the book.

Luckily, it hasn’t taken Normand 50 years to gain a faithful fan base. Thanks to Normand’s signature sign-off, “Thanks! I’m Kevin Hart! Goodnight!” some of his fans expect him to ironically sign Kevin Hart merch at his shows and he does. He says the whole Kevin Hart bit was actually born from his early frustration with bombing.

“Well, I used to bomb so much. I would kind of be bitter on stage and I would hate the crowd. I’d go, ‘Eh, I’m Kevin Hart, what do you care?’ It just stuck. Then I started doing it on TV and then it just became my thing.”

The real Kevin Hart hasn’t seemed to notice yet, unfortunately.

“I did it in front of him once, and he’s so in his head and so kind of busy and zoned out that he didn’t even notice. I don’t even know if he’ll ever catch on. People have tagged him in videos like, ‘Hey Kevin Hart, what’s up with this?’ and he doesn’t respond. He’s got too much on his plate I think.”

There is one comedy giant who has responded to Normand’s work though. We mentioned that Seinfeld gave Normand a sizeable shoutout, calling him his favorite up and coming comic last year. Normand says this was easily the highlight of his life. “It meant the world because I was working so hard in obscurity for 10, 12 years and nobody cared and then to hear about this giant comedic legend knowing who I am was unbelievable. It felt like it all paid off.”

If you need more Normand before or after these upcoming shows, you can check out his newest comedy special Out to Lunch for free on YouTube, catch him on The Tonight Show soon, and he’s also estimating he’ll drop a new comedy special next year. In fact, these shows at Hilarities will feature the brand-new material he has planned for his next special.