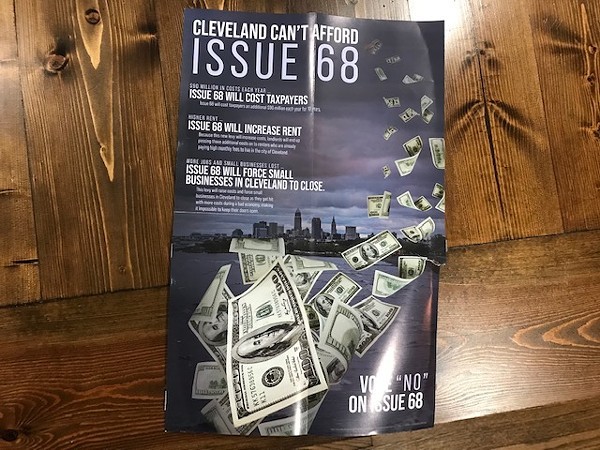 In a decisive electoral victory Tuesday, Cleveland voters passed Issue 68, the levy to support the Metropolitan School District. The win for the schools came despite what was likely a multi-million dollar marketing campaign attempting to convince voters that an investment in CMSD was dangerous and scary.

Citywide mailers and advertisements on social media deployed rhetoric about rising rents, small business closures and general economic precarity, but was short on legitimate information. The backers of the effort were never conclusively revealed, though Crain's reported that several downtown real estate developers opposed the levy and were likely involved.

The majority of Cleveland voters were not misled by the campaign. With 100 percent of Cuyahoga County precincts reporting, Issue 68 won by more than 20 points (61%-39%).

The levy will prevent cuts and allow the school district to continue to make investments in technology for students and teachers as they pursue new learning strategies during the pandemic and beyond. It will also permit the district to invest in new academic and extracurricular programs.

With a term of 10 years, the levy is not only a renewal, but an increase, adding roughly $7 per month in taxes for the owner of a median-value home in Cleveland ($45,000).  Businesses will pay 2/3 of the levy's total cost, which is why the downtown real estate community was so strenuously opposed.

But as Scene and others have noted, many of the developers most vocally opposed to the levy are themselves the recipients of generous public subsidies, applied to their real estate development projects. Their opposition was especially distasteful in light of that hypocrisy.

“Cleveland’s children are the real winners in this vote of support from the community,” Cleveland Teachers Union president Shari Obrenski said in a statement. “CTU educators are grateful to the citizens of Cleveland for their vote to support Cleveland kids and their future success. This levy will enable us to continue the significant academic progress we’ve been making in our schools. Cleveland voters recognized the need to support CMSD students, and were not swayed by the misleading propaganda from this cowardly anonymous group."

In a statement this morning, CMSD CEO Eric Gordon said:

Your renewed investment in the children of Cleveland comes at a critical time for the district and makes it possible to continue the progress we have made together.

It is worth noting that the community’s decision to renew its support of Cleveland’s public schools came at a time when an anonymous opposition group worked hard to convince voters that your continued investment in Cleveland’s kids was not worth it. I am heartened to see that Cleveland voters responded, saying unequivocally, “Yes— the children of Cleveland are worth our continued support.”

With your vision of Cleveland’s future, CMSD has an opportunity to build on our record graduation rates, increased math and reading scores, expanded access to preschool and our most recent efforts to ensure families in the worst connected city in the nation have digital devices and access to high speed internet.

Above all, passage of Issue 68 signals the strength, resilience and vision of a community known for your unwavering belief in the children of Cleveland and its commitment to their future.

Passage of Issue 68, which is the third renewal of our 2012 levy and a small increase in your investment, is a critical reminder every day of your continued trust, and of our responsibility to continue to deliver a return on your investment in Cleveland’s public schools.