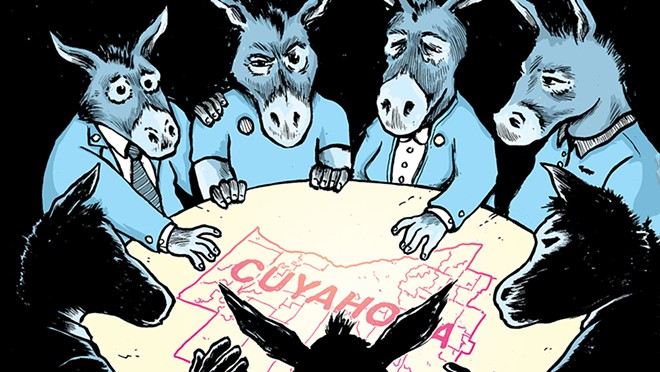 As we face down a close election at the national level, the results from Ohio leave little room for doubt. The Democratic Party in Ohio and Cuyahoga County did not perform well.

Donald Trump is on pace to win statewide with a higher percentage of the vote than in 2016. In Cuyahoga County, Trump garnered 10,000 more votes than in his last election. Even when accounting for population changes, that means Trump won a larger percentage of votes in Cuyahoga County—the supposed Democratic stronghold of the state.

Perhaps the most startling numbers come from Cleveland proper. Turnout across the country and in Ohio is generally up. But turnout in heavily-Democratic Cleveland did not even hold steady based on initial numbers. It declined. Overall, Democrats did not have a good night in Northeast Ohio.

We are still in the throes of understanding this election, but one thing has become very clear to me: Local Democrats have to take a hard look at our party and make changes. I say this as a proud Party member and a Ward 12 Leader – making me one of the 70 official City/Ward Leaders who make up the backbone of the Cuyahoga County Democratic Party.

I have worked inside the Democratic Party. I see how it is failing Ohioans and Clevelanders in particular.

I believe that a better Party is possible. But only if we have a clear-eyed assessment of what happened this election cycle.

Cleveland started out at a deficit. The Biden campaign wrote off Ohio. We had few resources, little support and no field offices. Strategy does change when you are campaigning in a global pandemic, but the apathy towards the state was palpable. We did not have an assigned field organizer in Cuyahoga County until the fall. In a normal campaign you would be starting paid field organizers early in the summer. When my ward was finally assigned an organizer, it turned out she was based in DC.

Until mid-October, we had so few yard signs we had to ration them. Until the last weeks of the campaign, there was no Biden-specific campaign literature to hang on doors.

The Ohio Democratic Party and Chairman David Pepper had little to offer either. There was no statewide strategy communicated to us, no statewide goals. We could not access even basic campaign resources through ODP. When some of my fellow wards wanted to begin a text-messaging campaign, they got the runaround for weeks before being told they could not get access to ODP’s texting platform.

And so, it became apparent early in the cycle that those of us in the Cuyahoga County Democratic Party were on our own. No longer propped up by national attention or a statewide campaign, we had to see what we could muster on our own.

Party leaders could have engaged Democrats early in the spring to design a plan for the cycle that everybody bought into. Most likely, each Ward or City Leader would have been given clear responsibilities and goals to hit starting in June. Each City or Ward Leader would then have mobilized their precinct representatives for their area and doled out responsibilities. We would have had regular check-ins on who was hitting their numbers. If an area was not looking good, we would send in additional help.

There was no consistent direction or resources given from Party leadership. Each Ward or City Leader was allowed to set their own course. Because many of the Leaders are also the city councilperson for their ward or the mayor for their city, many did not have time to get any electoral work done. Many precinct slots are unfilled. There is nobody to call on. Other precinct representatives just will not do the work, having been in the role for years without having to knock a door or make a call.

In sum, there was no county-wide plan and no sense that there would have been the resources to execute it if there had been one.

Of course, some wards and cities still built successful turnout programs. Indeed, hundreds of people – including dozens that I organized personally – did show up to get work done. And I will say that where a Ward Leader, precinct representative, or a volunteer expressed interest in engaging, CCDP provided resources as best they could. Without these efforts the turnout numbers could have been even worse.

But some Democrats doing good work on an ad-hoc basis is not the same as the Party having run a successful campaign in Cuyahoga County.

Looking at the turnout numbers and specifically the decline in Cleveland, it seems clear that the lack of political organizing had a material effect on the election. Some will read this argument and think I’m advocating for the rise of machine politics. I am not.

The everyday mechanics of good political organizing—the door-knocking, the neighborhood meetings—are not about bullying our neighbors to the polls. They are about engaging people who have given up on the political process because they no longer believe it has the power to improve their lives. Organizing is about giving people reason to believe that their act of voting is a meaningful decision that is worth doing.

As I worked with the Cuyahoga County Democrats this cycle, that drive, that reason for being, felt far away. The Party felt like a shell of what it could be, like it was merely going through the motions of offering walking packets and call lists without a coordinated vision of how to turn out the vote.

Rebecca Maurer is a local attorney and Ward Leader in Ward 12 for the Cuyahoga County Democratic Party. Her writing on voting and political engagement has appeared in The Plain Dealer, Belt Magazine, and Cleveland Scene.