105.7 Flipping to All Christmas Music Today Because It's Time for Something Nice Already Dammit 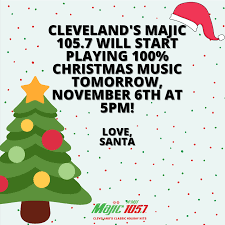 It's usually not until sometime right around Thanksgiving when the Christmas decorations go up and radio stations flip the switch to yuletide cheer 24/7.

This year, if you haven't heard, is a bit different.

If you didn't personally dig out the Christmas decorations the day after Halloween, then you probably know somebody who did, because eff it in this godforsaken year of two thousand and twenty. Bring on the cheer.

Radio stations across the country are feeling the same way. As of earlier this week, about 50 had already made the switch to Christmas music with one station on the east coast making the bold choice to have Santa Claus come to the dial in September.

This week, most major cities will have a station that's bringing holiday cheer, and Cleveland is in that boat thanks to 105.7 FM, which puts on its best green and red starting today at 5 p.m.

As for why Christmas is arriving earlier than ever, it's not only a soothing balm during this hell year for listeners but a lifeboat for some stations that have seen ratings drop precipitously this year with fewer workers in offices and fewer people in cars getting to those offices.

Radio consultant Lance Venta, who also owns and publishes RadioInsight.com, had already counted more than 50 station flips to holiday music as of earlier this week. “With listenership down so much due to the loss of commutes during the pandemic, stations are looking for anything to boost their ratings during the important fall ratings period,” he said.

In particular, mainstream adult contemporary stations, which frequently play all day in offices, have been hit hard by the disruption in work routines. That’s why Christmas couldn’t come soon enough for stations like KOST.

“Every year when KOST flips to holiday music, we see a point where we double our audience size,” Peake said. “There’s a huge demand for holiday music in Southern California. We like to flip as soon as we can because its ratings advantageous for us — balance that with how soon is too soon.”