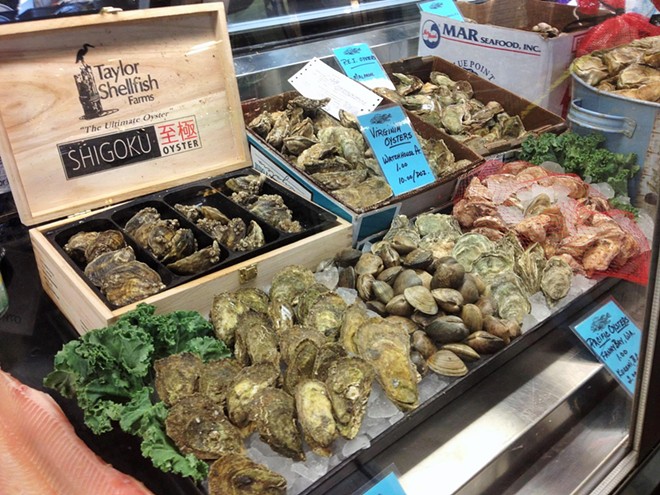 When Classic Seafood made the decision to not return to the West Side Market after shutting down in March, Kate’s Fish owner Tom McIntyre saw an opportunity for quick expansion. He took possession of the stand on the opposite end of the market hall and today opened West Side Seafood.

“It’s like one of the most unique stands in the market,” McIntyre says of stall E1, D1. “It’s kind of sweet.”

The decision to go with another business name as opposed to simply Kate’s Fish Too or whatever is to make a distinction between the two shops, while still increasing selection and sales.

“This is America,” he says. “People want choices so we’re going to give them choices. I just want to make the pie bigger and sell more seafood at the West Side Market. Kate’s Fish sells a good amount of seafood, but I think we can sell even more seafood.”

McIntyre says that there will be very little overlap in selection. The additional display space will allow Kate’s to focus on certain items while expanding others at West Side Seafood. For example, the new stand will offer a larger shellfish inventory than Kate’s, with items like oysters, crab, lobster and giant head-on prawns, which Kate’s has never offered.

One interesting line of products will be at-home seafood boil kits that include everything a customer needs to prepare a seafood feast at home.

“These seafood boil places are doing well and popping up all over the place,” says McIntyre. “We’ll sell seafood boil packages with crab, shrimp, potatoes, corn and sausage for a set price with different butters, sauces and oils. You just choose your sauce, take it home and cook it up.”

Kate’s Fish and West Side Seafood currently are the only seafood vendors at the West Side Market, says McIntyre, but he welcomes new competition.

One interesting distinction between Kate’s and West Side are the hours of operation. West Side will be open from Friday through Monday but closed on Wednesdays (Kate’s is open on Wednesday).

“Wednesday is an island day at the market; it’s surrounded by days off,” he explains. “You have to do a full set up and a full shutdown for one day and it’s really difficult.”