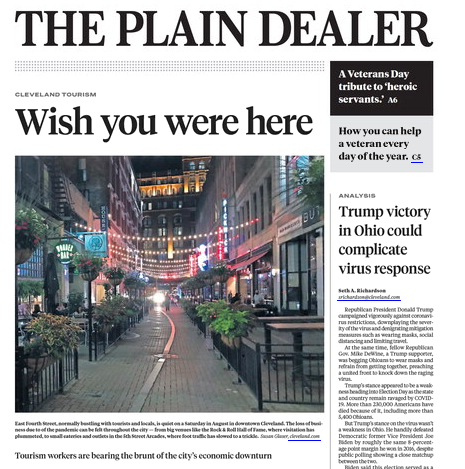 PD/cleveland.com editor Chris Quinn has issued an apology for "botching" Wednesday's front page. The error might have been minor — the sort of thing that happens regularly when stories are written for the web and published in print on a delay — but was magnified, as Quinn noted, by the story's prominent placement.

Quinn began receiving emails before dawn, he said, in response to a piece written last week by politics reporter Seth Richardson about Ohio's coronavirus response after Donald Trump's victory in the state. At the time of the story's digital publication, the national election had not yet been called. The story accurately reflected the then-current electoral map, but was not updated for Wednesday's print edition, by which point the race had long been called for Biden.

Here is the key offending paragraph, which has been updated with more timely information online.

Again, this is a factual paragraph that happens to be out of date. Quinn called the failure to update the story a "pretty awful mistake to make on the front page," and said that his staff was talking about ways to ensure that it doesn't happen again. He invited readers not to blame Richardson, who wrote the story.

Errors like these are generally venial sins. In many cases, they're more or less typographical. "Yesterday" must become "last week" and so forth. This one is worse not only because of the story's placement but because of the length of the delay — the information is by now nearly a week old — and the significance of the story. President Trump himself has refused to concede the election and many of his supporters have pronounced the election results fraudulent. The outdated information on Wednesday's front page becomes a partisan dog-whistle in context.

Quinn fell on his sword and said the blame should rest on his shoulders, which blame typically does. But the real culprit is the lack of local copy editors and page designers who would have easily caught the obvious mistake. Scene has written that the outsourcing of the PD's production staff — the 29 Guild employees who comprised the "Pub Hub" — paved the way for a less original, less local, less urgent print product. The remote production staff who hurriedly assembles the PD is also responsible for assembling nearly 20 other papers across the country. That arrangement leads to copy-editing errors and logistical snafus of which Wednesday's botching is a premiere example.