Recent Covid Cases Have Transcended Cleveland's Capacity to Count Them, But City Commits to Beef Up Staffing 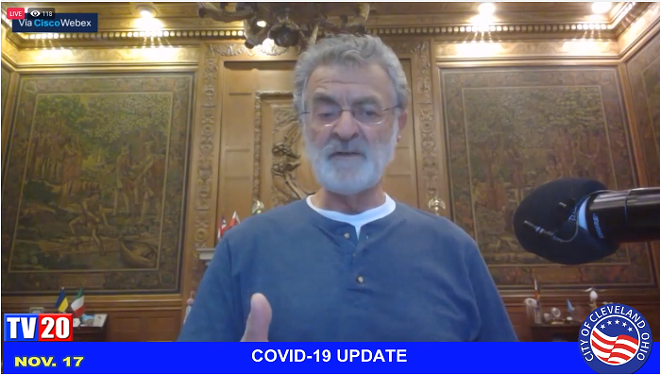 Since the pandemic began, the City of Cleveland has been sending out daily press releases with the latest Covid-19 case numbers and other pertinent updates about the local coronavirus response. Monday evening, the release included a shocking admission.

"The City of Cleveland is experiencing an unprecedented surge in coronavirus cases, unlike anything yet reported during this pandemic," it read. "Due to the remarkably high number of cases reported over the last two days, the Cleveland Department of Public Health is unable to provide the daily COVID-19 data report at this time. CDPH is still reviewing and analyzing each case that has been reported. Once the data review and analysis process has been completed, a full report will be shared with the public."

Tuesday, Mayor Frank Jackson and Public Health Director Brian Kimball explained the delay. They said that the city receives daily case information from a state database, and that city employees must then review each case to determine which are actually city of Cleveland cases. After a determination is made, contact tracing interviews begin.

The recent spike, a fourfold daily increase since the beginning of November, has strained the capacity of the public health department, which is tasked with these case reviews. An overwhelming number of new cases has backed up the current staff. Jackson said that data from Sunday, Monday and Tuesday will hopefully be available by this evening, but stressed that accuracy was the number one priority and information might be delayed further.

Kimball said that in response to the increasing numbers, both internal adjustments and external hires are being pursued. Jackson said that the recent reorganization of the Department of Public Health has not played a role in the current delays. He attributed it entirely to the massive case spike.

He estimated that daily new cases would be at or above the current seven-day average, which would put the city numbers between 150-170 cases.