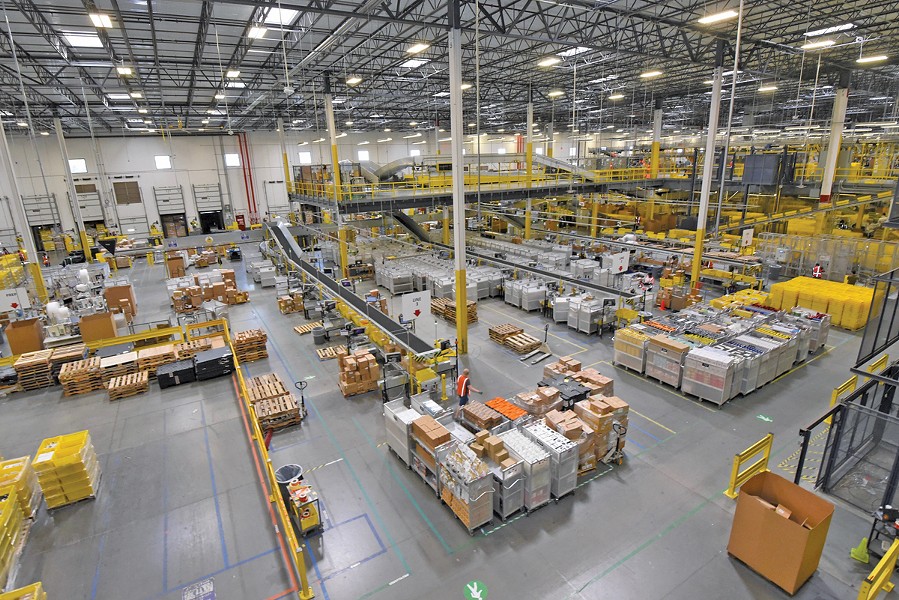 During November and December, Amazon warehouse workers across the country log more hours than during any other time of the year. Before, during and after "Cyber Monday," which this year falls on Nov. 30, the 3,000-plus workers at the Northeast Ohio Amazon distribution centers in North Randall and Euclid will scramble to fill an explosion of online orders. And they'll be subjected to the rigors, risks and workplace injuries that disproportionately arrive during the holiday season.

An investigation by Reveal from The Center for Investigative Reporting exposed the staggering rates of injury at more than 150 Amazon fulfillment centers nationwide from 2016 to 2019. The investigation concluded that Amazon's obsession with speed and automation had turned their warehouses into "injury mills."

“Amazon doesn’t want any long-term workers,” an employee at an Amazon facility in Portland told his local alt-weekly last year, when a portion of the Reveal data had been collected. “They want you to work hard and fast and get rid of you when your body can’t take it anymore. That’s their business model.”

Reveal's new trove of data showed that Ohio's North Randall location, "CLE2" in the Amazon code, was among the worst for serious injuries. The sortable robotic warehouse at the former Randall Park Mall site employs roughly 2,200 people and received substantial state and local tax breaks to locate where it probably would have anyway, given the mall's massive footprint, the site's proximity to a dense population center (Cleveland), and Amazon's need for more distribution warehouses to accommodate its one-day delivery guarantee for Prime members.

The Euclid facility, "CLE3," is also a sortable robotic warehouse that handles small and medium-sized packages. Employees began working there in June, 2019. By the end of the year, it had seen 117 total serious injuries, a rate of 9.8 per 100 workers. That's more than double the national average and was among the 40 worst Amazon facilities in 2019.

Reveal provided site-specific data to Scene, which showed not only the number and rate of serious injuries week-by-week, but the breakdown in hours worked, illnesses, other injuries and days away from work. The data also recorded fatalities. Neither CLE2 nor CLE3 had a fatality in 2018 or 2019, though a worker at the North Randall location died after testing positive for Covid-19 in May of this year.

Among other things, the data showed a massive uptick in hours worked in the months of November and December, corresponding with holiday gift-buying season. Fourteen of the 15 weeks with the most hours logged at either location occurred between the second week of November and the third week of December. Four of those weeks resulted in serious injury rates higher than 20 per 100 workers, which happened only 12 times in total through 2018 and 2019.

But these next several weeks will be grueling and dangerous for Amazon workers in Northeast Ohio, human beings who function as extensions of robotic equipment for the world's leading e-commerce giant. They will pick up items, scan them, and dump them into receptacles on large racks controlled by mobile robots. They will do so continuously for the duration of their lengthy shifts. In the final two weeks of 2019, workers at CLE2 worked more than 200,000 hours performing this punishing work. That was 2-3 times the weekly hourly totals through the winter and spring.

Amazon spokesperson Andre Woodson told Scene that nothing was more important to the company than the health and safety of their associates. He said that as the holiday season approaches, Amazon is "anything but complacent."

"We continue to invest in safety training and education programs, technology and new safety infrastructure," Woodson said, "and we see improvements through programs focused on improved ergonomics, delivering guided physical and wellness exercises to our associates at their workstation, mechanical workstation assistance equipment, improving workstation setup and design, forklift telematics, forklift guardrails to separate equipment from pedestrians, and parking lot improvements—to name a few. While any incident is one too many, we are continuously learning and improving our programs to prevent future incidents."

Woodson added that workplace injury data often requires additional context. In many of Amazon's newer facilities, he said, for example, injury rates tend to skew higher because of an influx or hires who may not have experience working warehouse jobs and who, in many cases, don't have appropriate footwear. He said that Amazon has created a "robust wellness training program" for their employees that focuses not only on workplace safety but on nutrition and mind and body health.