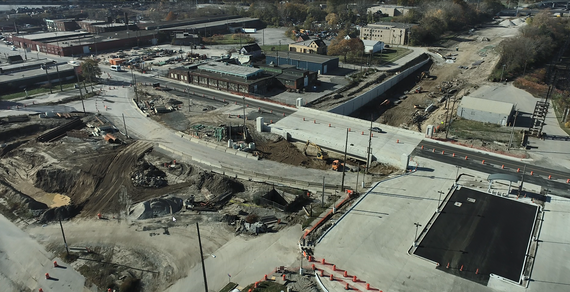 Additional work required on the Opportunity Corridor will mean an additional six months that the section of I-490 between I-711 and East 55th St. will be closed, ODOT announced this morning.

That stretch was scheduled to welcome back motorists in May 2021 after being closed for two entire years; that now will not happen until Nov. 2021.

Following a detailed review of the design plans, the Ohio Department of Transportation (ODOT) requested a change to the grade – or slope – where I-490/Opportunity Blvd. passes under E. 55th St. The Design-Build Team’s plans met the minimum standards; however, ODOT preferred a more gradual slope in order to make the roadway safer for all users.

This change added approximately six months of work and $4.6 million to the project. Additionally, unforeseen utility relocation delays have had an impact on the project schedule. The design and construction changes, and utility delays will not impact the overall completion of project in summer 2022.

Originally, I-490 was set to open in late-May 2021. At that time, I-490 traffic would have only had access to E. 55th Street via the new quadrant roadway as the entire boulevard was not scheduled to be substantially open until early-November 2021. Concerns for pedestrian safety and traffic congestion along E. 55th St. also led the Department to delay the original opening of I-490 to the new Opportunity Corridor Blvd.

Kokosing Construction Company, Inc. was awarded the design-build contract on the third and final section of the Opportunity Corridor with a bid amount of $150,858,250.00. Thirty million dollars under the estimated cost.