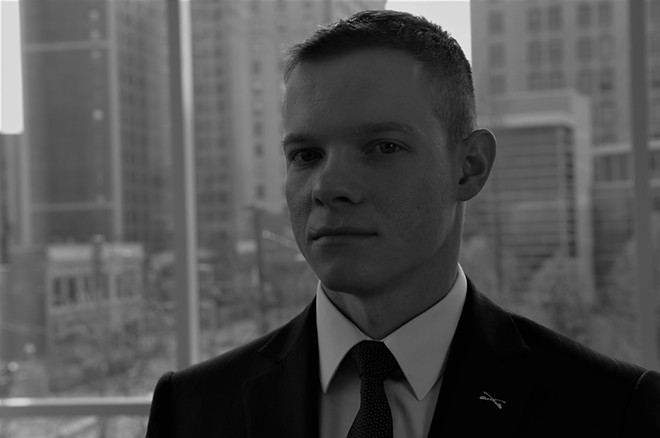 Twenty-nine-year-old Hudson native Arthur Kostendt has thrown his hat in what promises to be a wild and crowded ring: the 2021 Cleveland Mayoral race. A National Guardsman who graduated from Cleveland-Marshall law school in 2019 and plans to sit for the Ohio Bar Exam in February, Kostendt told Scene that he has not yet pulled petitions at the Cuyahoga County Board of Elections, but plans to do so soon. He has been in communication with a BOE official and is in the early stages of gathering signatures.

Sometimes stylizing his name as Arthur O'Kostendt — his middle name is Oliver, and he says he uses an apostrophe instead of a period to honor his mother's Irish heritage — the Warehouse District resident is a dues-paying member of the Cuyahoga County Republican party, though he referred to his membership as "casual" and says he's not in "lockstep" with the national GOP platform.

On his campaign website, he bills himself as a law-and-order candidate who wants to "protect" Clevelanders from violent crime, low-performing schools and an undisciplined government.

In a series of "position essays," Kostendt outlines a vision of civic improvement built on deterrence by punishment. He calls for "certain, swift and brutal" consequences for criminals and refers to police officers as "soldiers in the war against crime, a war we have been losing, a war we are losing so badly, we can scarcely say we have even been fighting." In Cleveland schools, he wants to give principals latitude to punish troublemakers without fear of "politically correct backlash."

Like other candidates, Kostendt expresses disdain for current leaders and specifically condemns an "in-crowd" of politicians and appointed leaders whom he sees as both architects and beneficiaries of Northeast Ohio's corrupt atmosphere.

He acknowledges his relative lack of experience and achievements in the political realm, but says Clevelanders should vote for him because he is a "leader, not a politician" and will be a mayor "who never fails to ask, 'What Can I Do For Us?'"

In an email, Kostendt told Scene that he was inspired to run because despite the city's natural advantages, Cleveland's government has failed residents in four key areas: law and order, education, the environment (including housing and the city's built environment), and City Hall operations. He wants his candidacy to draw attention to these failures.

"When I ask myself if I'd want to raise my own future family in the city I love, without having the wealth to educate and secure my loved ones privately, my honest answer is 'maybe not,'" he said. "That's something that I think the Mayor has the power to change, if a person with energy and vision takes the reins."

Kostendt lives in Ward 3 and said he felt running for City Council, against the incumbent Kerry McCormack, whom he respects, wouldn't be productive for the city. He also said he has no aspiration to spend his career in politics.

"I wish to run a spirited campaign for the job where I think I can make a real difference right now," he said.