CMSD Occupational Therapist Resigns After Photographs Suggest She Participated in Storming of Capitol, Says She's Moving On to Fighting Pedophilia in Government

January 08, 2021 at 1:47 PM
comment
A CMSD occupational therapist submitted her resignation the day after photos surfaced and allegations followed that she participated in the riots in D.C., including entering the Capitol and posing for photos on the floor of Congress.

The district confirmed Christine Priola's resignation to Scene and shared her resignation letter, which said she was leaving her position because she refused to take a COVID-19 vaccine, because she doesn't agree with how her union dues were used, and because, "I will be switching paths to expose the global evil of human trafficking and pedophilia, including in our government and children's services agencies." 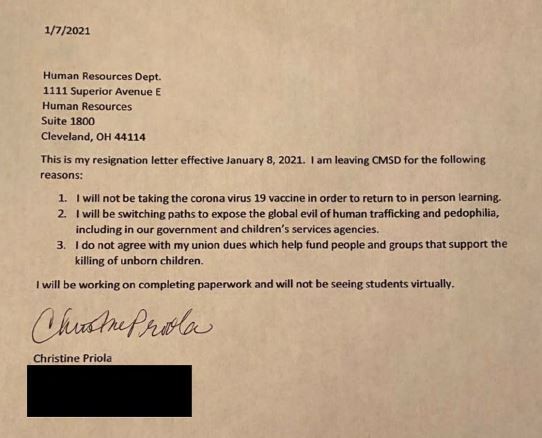 In a brief statement, a Cleveland schools spokesperson said: "Questions raised today about a former CMSD employee’s alleged involvement in the riots at the U.S. Capitol this week have also raised questions about the District’s position on such behaviors. While CMSD deeply believes in the right of any individual to peacefully protest, as many did on the Capitol plaza on Wednesday afternoon, the District deeply condemns the actions of those involved in the riots inside the Capitol and on the Capitol grounds. The right of peaceful protest, as protected by the first amendment, is a foundation of our democracy. The forcible takeover and willful destruction of our government is not."

The Cleveland Teachers Union acknowledged the reports in a statement and condemned the violence.

The Cleveland Teachers Union strongly condemns the violent attack on our democratic institutions that occurred this week. Rioters who broke the law should be held fully accountable. Our national affiliate has called for the immediate removal of President Trump for instigating this assault on our
country.

We are aware of reports of a Cleveland educator who engaged in rioting in the Capitol. We take these allegations very seriously and if true, they must be held accountable. While we support the right to peaceful protest, what happened inside the Capitol on Wednesday was not a protest, it was an insurrection. It is the exact opposite of what we teach our students. Anyone who participated must bear the very serious consequences of their actions.

Thankfully, despite the violent attempts to undo the will of the American voters, democracy prevailed. We will teach our students about this moment for years to come and will work to restore their faith in the fidelity of our nation’s peaceful transfer of power.