In anticipation of the first of hopefully many pop-ups, Kate’s Good Fish Company has revealed the menu for this weekend's seafood-themed event, which takes place January 15-17. Here it is, along with the original story from early December. (Order info is at GoodCompanyCle) 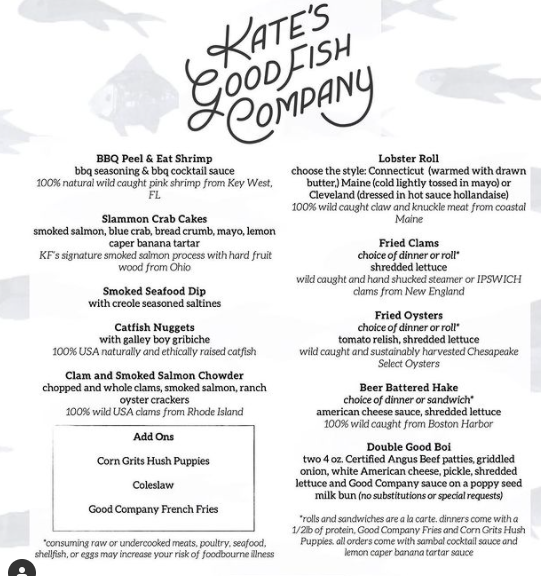 While his plans for a New England-style seafood shack at the West Side Market are still on hold, Tom McIntyre is pushing forward on a separate retail fish concept. McIntyre, owner of Kate’s Fish, will team up with Brett Sawyer of the Plum and Good Company to open Kate’s Good Fish Company. The take-out and delivery only kitchen will begin as a weekend-only pop-up January 15-17 before settling into a more consistent groove.

“I’ve been selling fish to Brett for years,” explains McIntyre. “We’ve been talking about doing something together forever but we didn’t know how. Obviously, these are unique circumstances and a unique opportunity.”

Kate’s Good Fish Company will operate out of Sawyer’s presently shuttered Good Company at Battery Park in Detroit Shoreway. The menu will offer items like clam chowder, lobster rolls, oyster po’ boys, fried fish sandwiches and seafood dinners – all made with the freshest possible seafood sourced and selected by McIntyre.

“I’m super-excited,” he says. “You know that I’ve wanted to do this for years at the market. If it goes well, if it’s well received and we like it, we’ll move forward with it on weekends during Lent.”

In addition to pick-up at the shop in Gordon Square, the food will be made available via the restaurant’s own delivery crew.

After the January pop-up, the team will take a break to evaluate the model and hopefully return to action in mid-February for weekly service through Lent.

And if that all goes well, adds McIntyre, “Hopefully it will be a springboard to other things. We want to do other projects together.”