Op-Ed: Euclid Cops Killed An Unarmed Man and Courts Let Them Get Away With It. That Has To Stop 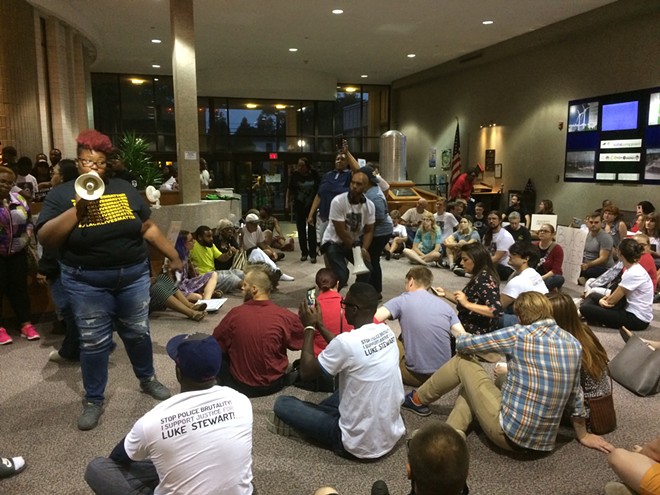 Nearly four years after police shot and killed Luke Stewart in Northeast Ohio, his family is asking the U.S. Supreme Court to take up his case. The central issue is whether people can hold the government accountable when agencies fail in their responsibility to train and supervise their employees in a reasonable manner.

Stewart’s death in Euclid illustrates how bad the oversight can be. The local police department trained its officers with jokes about excessive force. Instructional materials included a Chris Rock comedy sketch about how to avoid getting beat up by cops. Suggestions included punchlines like: “Get a white friend.”

Trainers also shared a meme that showed an officer beating a defenseless person with the caption: “Protecting and serving the poop out of you.” Rather than setting a professional tone in the department, the people in charge did the opposite. They actively encouraged police officers not to take people’s rights seriously.

The 6th U.S. Circuit Court of Appeals saw the evidence and agreed that the training program was “distasteful, perhaps inadequate.” But instead of authorizing a civil rights lawsuit, the panel of judges decided in August that Stewart’s family could not sue because of something called “qualified immunity.”

The legal doctrine, invented by the Supreme Court in 1982, shields police officers and other government employees from litigation unless their conduct has been deemed unconstitutional in a prior case.

Normally, qualified immunity applies only to individuals. But the 6th Circuit and three other courts of appeals have extended the special protection so it applies also to local governments when poor training causes violations of people’s constitutional rights.

Four other U.S. circuits have rejected the expansion of qualified immunity. And for good reason. If allowed to stand, the rule would cut off the only remaining avenue that citizens have to hold government agencies accountable when their employees violate civil rights.

Stewart’s family would have no defendant to sue for his death. And the government would have no incentive to avoid constitutional wrongs.

As the nonprofit Institute for Justice explains in a friend-of-the-court brief filed on Jan. 21, the rule also would create an unequal system that would allow some civil suits to proceed but not others. Cases would hinge on which particular violations have been clearly established as unconstitutional.

Stewart’s case shows how arbitrary the results can be.

Just two months before his family’s appeal reached the 6th Circuit, the same court considered another complaint involving the same use-of-force training program in Euclid. In that case, police officers used pepper spray and a Taser on Lamar Wright rather than shooting him in a moving car, like an officer did to Stewart.

Although both cases showed the same evidence of inadequate training, Wright was allowed to sue the city for damages, but Stewart’s family was not. That’s because a 6th Circuit case had already confirmed that pepper spraying and Tasing someone was unconstitutional, but no 6th Circuit case had specified that shooting someone in a moving vehicle was unconstitutional. Such a distinction for holding a municipality accountable makes no sense.

Arbitrary distinctions are just one barrier to government accountability. A network of doctrines already prevents government actors from answering for their unconstitutional acts. States are cloaked with sovereign immunity, for example, and individual officers enjoy qualified immunity.

With the extension of qualified immunity to municipalities, these barriers would be heightened, making it even more difficult to get back to the original promise of the civil rights statutes that allow constitutional lawsuits in the first place.

The Supreme Court must step in and reopen avenues for government accountability. Stewart’s family cannot be made whole, but his survivors at least deserve their day in court. After all, constitutional rights are just words on paper, unless they can be enforced.

Marie Miller is an attorney at the Institute for Justice in Arlington, Va.