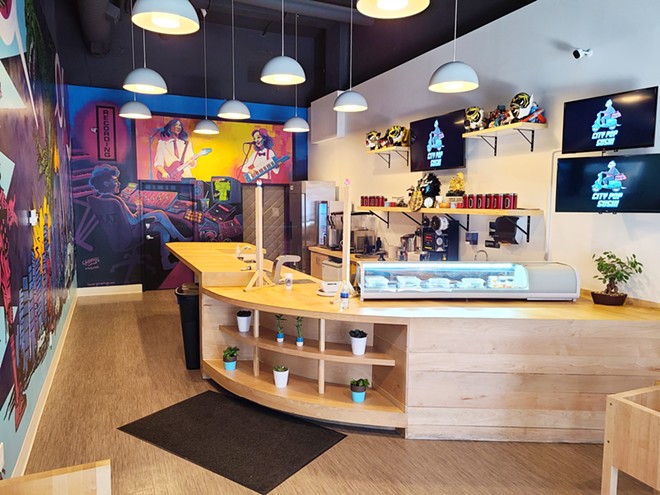 When City Pop Sushi (1816 E. 12th St.) opens downtown in early March, it likely will be one of the most visually stimulating eateries around, a candy-colored homage to Japanese pop culture.

Strowder was introduced to the art of Chad Kimes and Erin Caruso while shopping at Carol & John's Comic Shop in Kamm’s Corners, he says. He commissioned them to paint a pair of wild murals for the space. That original artwork will be joined by a Vigilante arcade game and eight TVs streaming city pop music videos, anime and `80s-era Japanese wrestling.

“City pop was basically Japanese people’s interpretation of American pop music,” Strowder explains. “Our restaurant is kind of the same, but opposite. We’re all about appreciation of that culture. You don’t have to be Japanese to appreciate sushi or anime or video games or what have you. Our restaurant is a celebration of that music.”

The 850-square-foot space most recently was home to Vintage Tea (which relocated to 11607 Euclid Ave.). It features an open floorplan dominated by a blonde wood bar, making it ideal for a quick-serve format. Strowder says that as a downtown worker for most of his adult life, he understands the needs and desires of the weekday lunch crowd, which will be his bread and butter.

He’s combining that understanding with a family history rooted in restaurant ownership.

“My wife’s family owned China Gate restaurant, which was around for about 40 years,” he says. “They went out of business, but we’re continuing the family lineage of food.”

Sushi based in the tradition of California Rolls – think rice and seaweed wrapped around cooked ingredients – will be the focus.

“We’re taking traditional techniques and we’re mixing in new flavors,” states Strowder. “We don’t have anything raw on our menu.”

Rolls, both grab-and-go and made-to-order, will star fully cooked items like bacon, steak and shrimp. They will be joined by dipping sauces such as wasabi mayo and yum-yum.

City Pop Sushi will be a weekday-only restaurant, but Strowder hopes to add weekend events like video or tabletop game tournaments down the road.