Savage Love: My Teenage Son is Stealing Our Sex Toys 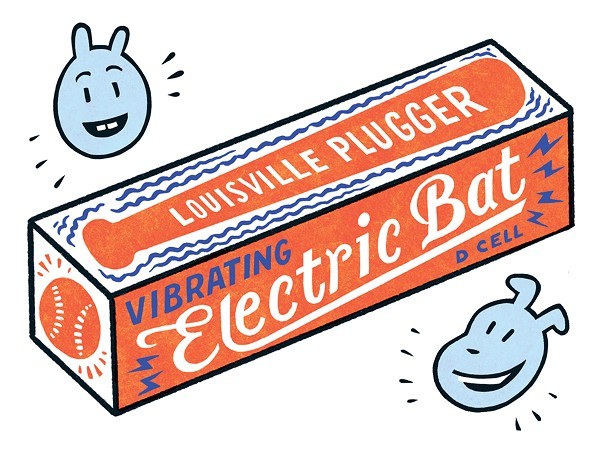 I'm positive you've written something about this in the past. I have searched your archives but have only managed to find people arguing in the comments about this topic when what I want is your advice. My 16-year-old son is stealing our sex toys. My son took my husband's handheld toy several months ago. I found it where it shouldn't have been and let my husband know. He talked to our son and told him these are personal items, like a toothbrush, and that he needed to stop taking them. A few weeks ago I noticed my dildo was missing. I thought I had misplaced it or that my husband hid it somewhere. As it turns out, our son took it. We talked with him again and stressed that these are personal items and not something to be shared. I want to get him his own toy so he stops taking ours. My husband is squicked out about it and I agree it's weird to have your parents buy a toy for you, but he clearly wants one. I don't want to pick it out. I want to give him a prepaid gift card and have him pick out what he wants from the website of a reputable shop. Is there a better way to handle this?

Teenagers. Going into their rooms for even a second — even just to leave clean and folded laundry on their beds — is an unforgivable invasion of their privacy, a world-historical crime on a par with the Nazi invasion of Poland, an atrocity that should land Mom and Dad in a cell in the Hague. But that same kid will tear their parents' bedroom apart looking for Mom and Dad's sex toys, any cash Mom and Dad have at home, Mom and Dad's secret stash of pot, etc. Because while they're entitled to absolute privacy, Mom and Dad — or Dad and Dad or Mom and Mom — aren't entitled to any privacy at all. (And your son may never forgive you for the embarrassment you caused him when you asked him not to steal — and not to use — your dildo.)

How do you handle this?

You could forbid him to go into your bedroom. You could even put a lock on your bedroom door. But you'll forget to lock it one day or one day he'll learn to pick the lock and before you know it he'll be back in your bedroom picking through your sex toys.

You could run out the clock. Your son is 16 years old and he'll hopefully be out of the house in less time than it took to get him out of diapers. Twenty-four short months, hundreds of millions of COVID vaccinations, and a few college applications are all that stand between you and having your house all to yourselves again. At that point, you and your husband won't have to worry about your son stealing your sex toys — hell, at that point you can make a lovely centerpiece out of them for the dining room table. But while running out the clock allows you to avoid some squickiness, you're still gonna have to worry about him swiping your sex toys or — even worse — swiping one, using it, and then putting it back without cleaning it properly. Most 16-year-old boys can't clean themselves properly; the odds that your son is capable of sterilizing your dildo after using it on himself are very, very low. (The odds that your son can make you wanna jump in a time machine and go back 17 years and sterilize yourself? Very, very high.)

You could buy him some sex toys. I think this is the best option. Get your son a gift card that he can blow on some toys for himself at a reputable sex toy shop. Or you could pick out a few for him — you already have a pretty good handle on the type of sex toys he finds appealing — and leave those toys for him on his bed next to his clean and folded laundry. Having a few sex toys of his own won't necessarily stop him from tearing your bedroom apart — there's still your pot and cash to find — but it will make him less likely to tear your bedroom apart looking for sex toys. And perhaps most importantly, buying your son some sex toys will allow you to suspend your disbelief and pretend your son isn't looking through your sex toys long enough to help him fill out those college applications.

A few weeks ago in your column, you were responding to a guy who was unsure about his relationship because his boyfriend's kinks didn't match up with his own. You said that kinks are "hard-wired" and that, for someone who has them, acting on their kinks is necessary for them to have a fulfilling sex life. Wow. That leapt off the page at me. This is something I've struggled with most of my life and that made things so crystal clear. From the time I was first sexually aware, I knew I was gay and that I was attracted to BDSM. I'm five years out of a 20-year relationship. My partner and I dabbled in BDSM, but I never felt like he was really into it. He was just doing it for me. When I asked what I could do for him, he'd always say "nothing." That made it even more disappointing. The relationship didn't end over his stuff, but I regret sticking with it — and an unfulfilling sex life — for so long. The kink stuff started so early for me. Hard-wired doesn't even begin to describe it. Pre-puberty, I was fascinated when I saw guys getting tied up on TV, in comics, and in movies. But now here I am, single and 63 years old. I haven't dated anyone since my relationship ended. I don't want to date purely vanilla people or people with kinks that aren't compatible with mine. I'm just not sure what to do. Any advice?

In the column where I described kinks as hard-wired — which they are for most people, INCA, although some folks do manage to acquire them — I didn't advise kinky people to date only other kinky people. So long as a kinky person isn't (1) being shamed and (2) is allowed to enjoy their kinks with others who share them, a mixed kink/vanilla relationship can work. So don't limit yourself to dating only guys who are into BDSM. Date vanilla guys you meet through mainstream dating apps, but be open about your kinks from the start and be clear about your intent to enjoy your kinks with guys who share them. And date kinky guys you meet on kink dating apps — there are plenty of guys your age on Recon, the biggest personals site for kinky, gay, and bi men, and guys of all ages who are into guys your age. Good luck.

Gay boy here with a new boyfriend. We’ve been together for almost two months and I TOLD HIM that I want an open relationship, but I AM NOT comfortable with him dating other men. I MADE THAT CLEAR. A week ago, he oh-so-casually drops that he’s been meeting up with a guy for EIGHT FUCKING YEARS! I told him he had to STOP this, but he REFUSES to stop it. He says they aren’t “dating” so he didn’t betray me. I looked at their text messages — GOING BACK YEARS — and this guy will send him a message once every few months and my boyfriend hurries over to his house to blow him. My boyfriend thinks it shouldn’t matter that he’s “servicing” this one other person since we both fuck around. My problem is the “ONE OTHER PERSON” part of the equation! I am NOT interested in monogamy but I am STRONGLY opposed to MY BOYFRIEND having an ONGOING THING with another man! If our ages matter: I’m in my mid-20s and VGL, my boyfriend is in his mid-30s and VGL, and this guy is in his LATE 40s and TOTALLY AVERAGE LOOKING. I do not see why my boyfriend won’t GIVE UP this man for me.

—Really Angry Guy Into No Games

I can almost see why your boyfriend wouldn’t want to give up this guy for you, RAGING. I mean, if I squint I can almost make it out. …

Look, your boyfriend has been servicing this guy for almost a decade. If they wanted to date, they’d be dating. If they wanted to be together, they’d be together. And if you force your boyfriend to choose between the DEMANDING INSECURE CAPS BOY he’s known for a little less than two months — that would be you — and the guy he’s been servicing for a little less than a decade, you’re going to lose. If you wanna be with your VGL boyfriend, RAGING, offer to grandfather the average guy in, i.e., agree to him continuing to service this impossibly old fart on the condition that your boyfriend doesn’t add any new “regulars” to his rotation. But on the off chance your boyfriend also reads my column: OMG, DUDE, RUN.