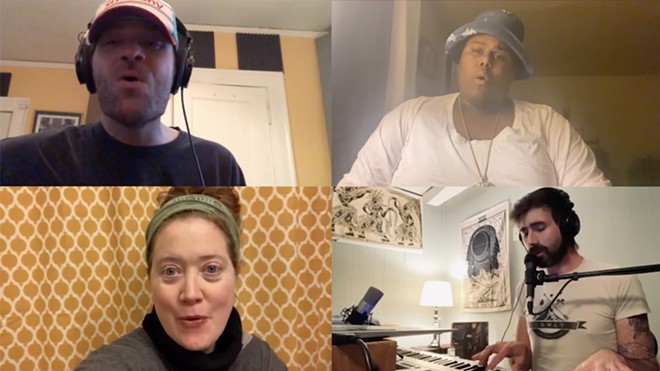 Karas and Kirby recruited 18 musicians, many of whom had been recent recipients of the Northeast Ohio Music Relief Fund grant provided by the local non-profit, Cleveland Rocks: Past Present and Future.

To date, the non-profit has raised over $45,000 in relief for musicians.

Working remotely because of the pandemic, Kirby solicited song titles from the group: “When the Lights Come on Again” was the winning title. Kirby then fielded ideas for verses and a chorus from the participants, which he then combined to create an earworm of a song. He asked the participants to sing the chorus, a verse with words/melody/phrasing all their own and then the chorus again, and, with a little help from local producer Jim Stewart of Jim Stewart Studios, the finished product came together.

“The final product celebrates the diverse genres of music and talent heard throughout Cleveland,” reads a press release about the track. “’When the Lights Come on Again’ is a hopeful anthem for musicians and music lovers alike, and a song of such power required a video that would not only showcase some of Cleveland's greatest talent but also visually celebrate Cleveland’s treasured music venues."

Cindy Barber, director of CR:PPF and Beachland co-owner, reached out to her friends Ron Goldfarb and Tony Weber at Goldfarb and Weber Creative to help assemble the music video.

"Editor Vic DiAngelo captured the magic and emotion of Cleveland's music scene in this video, and we are so proud to share it with the entire city," reads the press release.

The song and video has already raised over $2500 for #saveCLEVenues fund in the first weekend of its release. CR:PPF has set a fundraising goal of $10,000 and hopes with local press support, it will generate the necessary awareness to reach its goal.

C-Notes "When the Lights Come on Again " Cleveland Rockers: Past Present and Future