Bipartisan Bill Might Finally Abolish the Death Penalty in Ohio 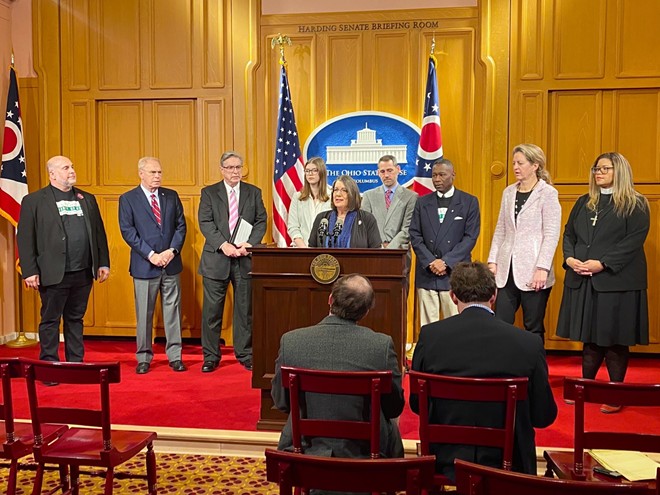 A bipartisan group of Ohio lawmakers will soon introduce legislation to abolish the death penalty in Ohio.

State Sen. Nickie Antonio in a virtual press conference today said, “There is a team right now that is dedicated to ending the death penalty in Ohio. And that team can only get larger.”

The bill will be similar to the one Antonio introduced with a Republican co-sponsor last year that would also transition all current death sentences to life in prison without the chance of parole.

Ohio is one of 28 states that currently has the death penalty, though the state hasn't executed an inmate since July 2018 after the lethal injection cocktail used by the state came under scrutiny and Ohio struggled to find a manufacturer willing to sell it the necessary drugs.

Momentum has built in conservative circles in recent years to do away with the death penalty, including from a statewide group called Ohio Conservatives Concerned About the Death Penalty that launched early last year.

“As we have seen in recent polling, public opinion has dramatically shifted against Ohio having the death penalty. Conservative's evolving views of the death penalty have been a major reason for this movement of public sentiment," OCCADP member Michael Hartley said today in a statement. "Ohio is a pro-life and fiscally conservative state. The death penalty no longer represents Ohio’s values and it is time for our state to finally repeal this policy.”

Supporters argue that the system is inherently flawed — according to the Death Penalty Information Center, 166 Death Row inmates have been exonerated since 1973.

And beyond the moral arguments at play, note that death penalty cases cost taxpayers 10 times the amount of non-capital cases.

“The death penalty is expensive, inhumane, impractical, unjust and often erroneous. Abolishing it is a practical solution,” Antonio said in a release. “This is not a Republican or a Democratic issue. No matter what a person’s reason is for supporting this legislation, we all agree that this is critical for our own collective humanity. It is our responsibility to work together across party lines and legislative chambers and move forward to end the death penalty in Ohio.”

DeWine has remained non-committal on the issue but has said no executions would go forward in Ohio unless the legislature approved a method that wasn't lethal injection and, in interviews last year, distanced himself from being a capital punishment supporter.