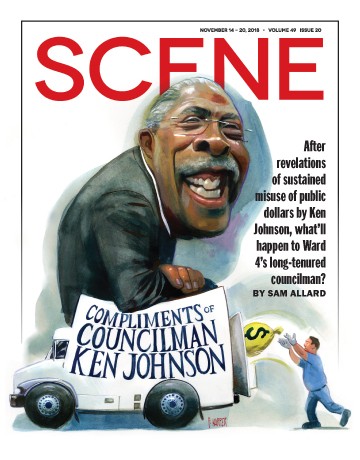 The charges stem, per the Department of Justice, from a scheme in which Johnson and his assistant, Garnell Jamison, defrauded the city by submitting false monthly expense reports for a decade. Johnson received the $1,200 monthly maximum as reimbursement for "ward services" that were never performed. Johnson is also alleged to have benefitted from federal dollars he steered to the Buckeye Shaker Square Development Corporation.

Johnson, Jamison and the former head of Buckeye Shaker Square Development Corporation, John Hopkins, were all arrested Tuesday. Johnson is expected to appear, by videoconference, in federal court later Tuesday.

"The allegations set forth in today’s indictment detail the exploitation of public office for personal gain," said Acting U.S. Attorney Bridget M. Brennan, in a DOJ press release. "Such conduct may bring about a temporary financial benefit for those involved, but it harms the public’s confidence in its elected officials."

Equally harmful, no doubt, is the fact that these alleged crimes, and a panoply of related corrupt activities, have been out in the open for nearly three years.  Former Cleveland.com columnist Mark Naymik was breaking a new scandalous Ken Johnson story on what felt like a daily basis though the summer and fall of 2018, and hardly anything was done about it. Johnson was permitted to keep his council sinecure, where he's been double-dipping since 2013, with no repercussions of any kind.

Talk about harming the public's confidence in elected officials!

The city made statements about investigating the allegations in Naymik's reporting, and Council President Kevin Kelley, to avoid a cascade of negative PR and deeper investigative reporting, stopped allowing the monthly reimbursements. An outside auditor determined, in the aftermath, that a number of council members other than Johnson, including Kelley, were improperly filing their monthly expense reports. Joe Jones, Kevin Bishop, Kerry McCormack, Mike Polensek, Anthony Hairston, Dona Brady, Anthony Brancatelli, Jasmin Santana and Brian Kazy were also named.

Kelley then vowed to "tighten rules" governing these monthly reimbursements.

The whole of Cleveland City Council should be squirming at this moment. They likely know that the FBI has been making the rounds in Ohio, and that Ken Johnson very well could be the first domino to fall in Cleveland. In 2020, Cincinnati was rocked as three council members there were charged with accepting bribes related to development deals. Four council members in Toledo were also indicted in a bribery and extortion scheme last year. Who's next?