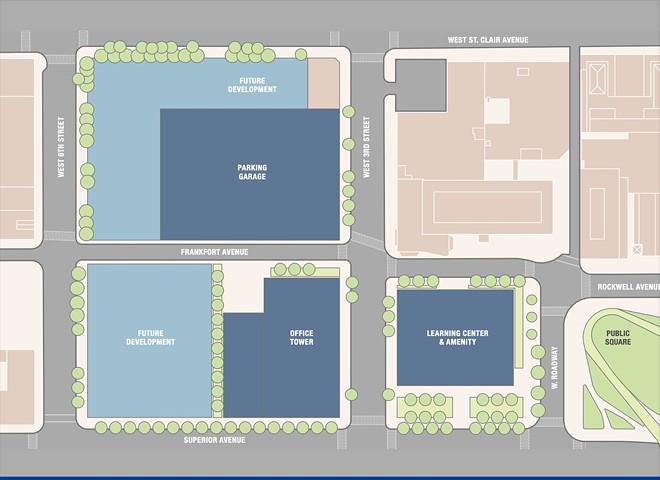 Sherwin Williams, the global paint giant that made headlines in November for firing its most famous TikToker, has announced that it will begin construction on its downtown Cleveland headquarters in late 2021.

In a statement last Friday, the company said it would also break ground on its new research and development facility in Brecksville in the fourth quarter of this year. Employees are currently expected to return to both locations in 2024.

While the coronavirus pandemic has delayed the construction schedule, the company says it is still committed to building offices where most employees come to work regularly. Both the HQ and R&D sites will be "designed to foster [Sherwin Williams's] strong culture of community, collaboration, innovation, employee development and engagement," an updated FAQ declared.

Detailed plans for the downtown site are still unavailable. They are likely to remain that way through the duration of the planning and construction process. The City of Cleveland entered into an agreement with Sherwin Williams that gave the company sweeping authority to classify information related to the project as "confidential," and even mandated that the city give Sherwin Williams prior warning if the media requested information related to the project.

The company will release information when and if it chooses to do so. For now, all that's available is the above site plan. It shows the main office tower at the corner of Superior Avenue and W. 3rd Street and a "Learning Center & Amenity" building on the block immediately west of Public Square.

PD/cleveland.com art and architecture critic Steve Litt was dismayed by the "bare bones" plan released Friday. In an unusually harsh column, he called the plan a "masterpiece of tight-lipped discretion" and asked a series of pointed questions related to the in-progress design.

How will the new buildings engage the public spaces around them? Will they include street-level amenities such as retail, public art and high-quality landscaping, and street furniture? Will they be connected by overhead walkways that remove pedestrian traffic from streets?

And there’s more: How will the buildings be oriented to shape views and create a sense of ensemble with one another, and with the buildings and public spaces around them? Will the architecture — in style and use of materials — be great, or ho-hum?

These are good questions. But Sherwin Williams, having secured its estimated $100 million in public subsidies and a contractual assurance that it gets to dictate the flow of information to the public, is under zero obligation to answer them.