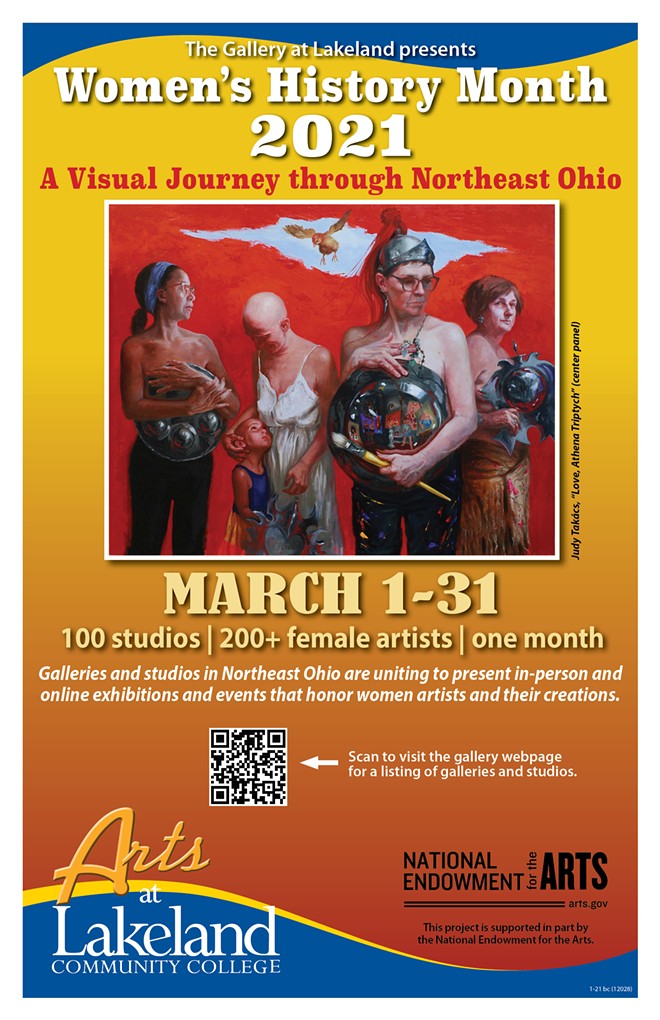 One hundred studios and more than 200 female artists will be exhibiting in person or online in this expansion on the annual show “from WOMAN XIV…,” which started in 2009 and was spearheaded by Mary Urbas, Gallery Coordinator/Exhibition Curator at The Gallery at Lakeland Community College.

All month long selected art galleries, art centers and studios in Northeast Ohio will be exhibiting work created by women, of women and about women. Viewers may participate in self-guided tours where they may see art created by local, regional and national women artists, and meet them at the various venues “in person” and through virtual receptions. All events are free and open to the public.

With support through the National Endowment for the Arts, Urbas has coordinated the creation of a self-guided art gallery tour/directory that includes galleries and studios that are owned by women, have women directors or curators, and will feature artwork created by women during Women’s History Month 2021. The directories date back to 2014, when just 16 venues were included.

“The project is HUGE, but it’s something I could manage and coordinate,” says Urbas. “The galleries curated and organized their own exhibitions. Gallery directors and curators have their own vision(s) that they want to see materialize. I am constantly checking out galleries and exhibitions; visiting artists in their studios, so I can have a finger on the pulse…it made sense to work together with my gallery colleagues to help market and promote each other’s galleries and our artists. It was a way to make the connections between us stronger. If the artists succeed, the galleries succeed. It’s a win win situation.”

Urbas has for the past 38 years worn many hats — a gallery owner, curator, teacher, consultant, and exhibiting fiber artist. She received her BFA from Cleveland Institute of Art in 1980, majoring in Textile Design and Silk Screen Printing and minoring in Weaving and Printmaking. In 1997 she opened The Gallery in Chagrin Falls, which featured contemporary fine arts and crafts. Later, Urbas attained the position of Gallery Curator and Assistant Director at the Valley Art Center in 2001 where she taught adults and children before beginning her position at Lakeland Community College, where she's now been for more than a decade.  “from WOMAN…” is a project she has been exuberant about since its inception and she's expanded the scope over the years while cultivating supporters and participants.

“I was originally inspired by the Guerilla Girls, based out of New York City,” says Urbas. “They wrote a manifesto about the advantages of being a woman artist. I have it hanging in my office. Underneath all the sarcasm…was the underlying truth. Throughout history, women artists have not been as well promoted and/or represented as their male counterparts. I am a woman gallery director, who curates exhibitions. I wanted to take advantage of my situation and promote the work of my talented artist friends.”

One gallery participating in this collaborative for Women’s History Month is Negative Space gallery, located at 1541 E 38th on the second floor of the Asia Town Center. Negative Space will showcase the works of four women artists: Deborah Silver and Marla D. Kassof have an opening in the annex gallery with an exhibition called “texTiles.” In addition to the opening, Negative Space’s artist and curator, Gadi Zamir will have the in-house gallery studios open where viewers can visit artists, Tessa LeBaron, Jessica Cricket and their new artist in residence, Linda Dempsey. The opening reception will be held, Saturday. March 6, from 5–8 PM. It is intriguing to see that Urbas' vision has generated such a huge response from so many galleries, artists and curators.

“There’s that power in numbers,” exclaims Urbas. "Since I am based in Lake County, I wanted to expose the Lakeland community to all the various venues and possibilities; to encourage them to travel west and south into Cuyahoga and Geauga County, including Cleveland and its surrounding suburbs. There is a concentration of women artists who maintain studios in the 78th St. complex; on Cleveland’s west side, bordering the Gordon Square Arts District. I also wanted to help some lesser known galleries gain some recognition and increase their visibility…If I created a directory of the participating galleries, art centers and studios, the viewing public could easily maneuver throughout the various locations; and experience the joy and excitement of discovering new artists and galleries.”