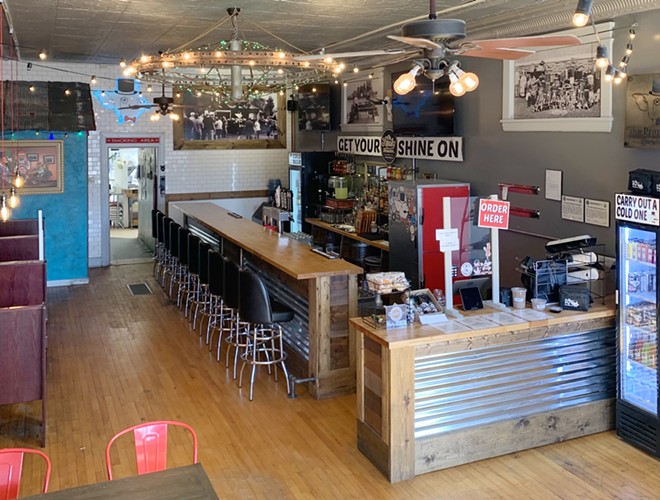 The Proper Pig Smokehouse (17100 Detroit Ave., 440-665-3768) in Lakewood will turn five years old this coming April, and when that date rolls around, owners Shane Vidovic and Ted Dupaski will have plenty to celebrate.

Since Covid hit, the popular barbecue joint has focused solely on carry-out, which has allowed them to survive the long year, says Vidovic. But now, the team is gearing up to reopen the doors to dine-in customers for the first time since last March. And when customers do pass through the doors on (or after) Friday, March 12th, they will notice many appealing new features, not the least of which is a full bar.

“After we figured out that we were probably going to make it through, we made some changes,” Vidovic explains.

The small food-prep area in the rear of the room has been eliminated. In its place now sits a lengthy 10-seat bar that stretches more than halfway towards the front door.

“We have a full liquor license now, which will allow us to do a lot more fun things like fresh lemonade and tea-based cocktails,” he says. “Those will be the base of many of our house drinks. You can add different fresh fruit purees to mix into it.”

Proper Pig now has a selection of draft beer for the first time, including two proprietary labels from Cleveland’s Jolly Scholar. The Pig also has a special arrangement with Ole Smoky Moonshine. They will offer two Moonshine-based cocktails – a punch and margarita – on draft along with a selection of 23 different flavored whiskies. Customers will be able to order flights of the popular hooch.

“We’re not normally a place you’d come with a date; it’s usually like a bunch of dudes,” Vidovic jokes. “We’re hoping with some of the things we’re putting in, and the drinks, we can get you to hang out for a little.”

There will some changes in the food program as well. They will roll out new bar-friendly snacks like queso, smoked wings, brisket nachos and one-pound baked potatoes topped with smoked meat, barbecue sauce and sour cream.

The kitchen is once again offering combination platters, which had been benched for the past year in favor of bulk meats and sandwiches. And for St. Patrick's Day, they’ll be dishing up smoked corned beef on rye bun sandwiches.

The Proper Pig might even bring in some live music and debut theme nights down the road, adds Vidovic.