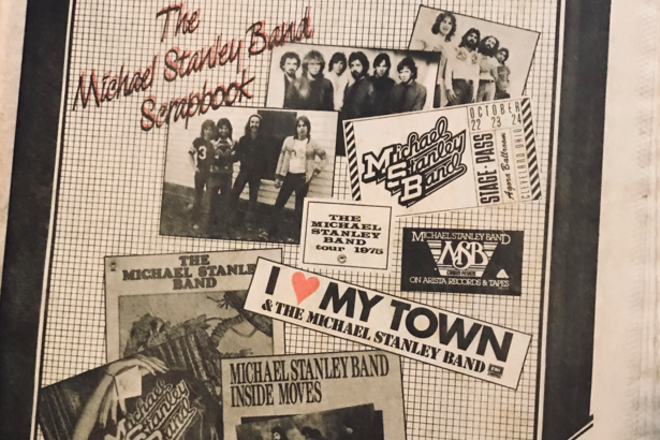 There are the tunes considered his classics: the early solo signature "Rosewood Bitters," the Heartland staples "Lover" and "He Can't Love You," and the You Can't Fight Fashion top 40 hit "My Town." Many might just take the easy way out and name every song on the legendary 1977 live album Stagepass, an LP led by the astonishingly complex "Midwest Midnight." But Clevelanders dig deep with Stanley's catalog, so the answer might be a Michael Stanley Band album track or a solo cut he released during the last decade.

But during a career that stretched well over a half-century, the musician born Michael Stanley Gee also prioritized lyrical depth: first loves and first heartbreak, wrestling with ambition and struggling with unrealized dreams, jumping into relationships that may or may not pan out, and the difficult of facing mortality. He wrote these songs through a Midwest lens, meaning he eschewed clichés and easy answers, and instead offered unvarnished truths steeped in resiliency and pragmatism.

Such incisiveness made him a perceptive—and empathetic—lyricist. "The thing about Michael—he saw us," says Cleveland native Holly Gleason, an award-winning journalist and the author of Woman Walk the Line: How the Women in Country Music Changed Our Lives. "He lived it. He understood why a line like, 'The boys are out on Mayfield / Everybody dressed to kill,' was every kid on the east side, driving back and forth trying to impress a girl.

"He understood why a line like, 'Thank God for the man who put the white lines on the highway' happens at that crisis point in a relationship—and you're on the turnpike, because it's the only way to get there, and you can barely see for crying, and then you're in that lake effect snow.

The feeling generated intense loyalty and, at the height of Michael Stanley Band's popularity in the '70s and '80s, jaw-dropping local support. The band sold out two shows at the Richfield Coliseum around the 1981-82 New Year's Eve holiday, and then drew more than 74,000 during a sold-out four-night run of shows at Blossom Music Center in August 1982.

Outside of Cleveland, Michael Stanley Band were also massively popular in St. Louis—the group opened for acts such as Heart, Kansas and the Allman Brothers there—and hobnobbed with big music industry names: The band worked with producers Bob Clearmountain, Don Gehman,
Eddie Kramer and Mutt Lange, and once had a memorable gig with a then-unknown AC/DC and the Dictators in 1977. They also inked a series of major label record deals, which led to national exposure. The video for "He Can't Love You" was aired twice on MTV's first day in 1981, while the success of 1983's "My Town" led to an appearance on American Bandstand and Solid Gold.


The Michael Stanley Band broke up in 1987—after a 12-night run at the Front Row Theater—but Stanley stayed in the public eye. He became a familiar local TV icon thanks to a stint as co-host of PM Magazine, and continued to play music. As a solo artist, his songwriting themes expanded and matured—like 2005's "Home Tonight," a simple but wrenching song about confronting mortality head-on, or 2008's "Just Another Night In America," about struggling to find a silver lining even when life feels uncertain.

"He had — especially with the solo albums this century — some really profound songwriting," Gleason says. "'Romeo is Bleeding,' 'The Ground,' 'Fait Accompli.' And for somebody to care that much about their songwriting, it says a very great deal about their passion for how words and music collide. And that's why he did it. That's why he kept making records all the way throughout his life."

James Gang drummer Jimmy Fox crossed paths with Stanley in many different capacities: as musicians, during the course of business—Fox worked for the Belkins' management arm, who oversaw Stanley's career—and as friends. During the prolific last decade especially, Fox says Stanley would always pass him any new albums, which would lead to a discussion about the music.

"In the conversations we had about it, it impressed me that he was writing almost because he had to," Fox says. "It was important enough in his life to get these things out. There was no thought towards success, other than the fact that everyone hopes for it.

"You know, certain artists, they make an album or two that doesn’t succeed, and they’re done. That’s it; they’re not going to do that anymore. That never ever could have happened with Michael. Because Michael never stopped writing—and he never stopped having something to say."

Stanley started his career in the 1960s, part of the area's thriving teen garage and rock 'n' roll band scene. While a student at Rocky River High School, he was lead singer of the Scepters and later eventually joined popular British Invasion-inspired local band the Tree Stumps. The latter evolved into the band Silk, which landed a deal with ABC Records and debuted with 1969's psychedelic-rock influenced Smooth As Raw Silk. (In fact, the band's labelmates included the James Gang, who released their 1969 debut, Yer' Album, around the same time.)

That LP marked Stanley's first collaboration with producer Bill Szymczyk, who would later also work with Eagles, B.B. King and others. The pair's partnership endured for more than a half-century; as Fox puts it, "He was going to make that record, Bill was going to mix it. That was that. That was death and taxes stuff." In recent years, Stanley was extremely prolific, which Szymczyk recalled fondly.

"About every minimum 18 months—most likely, 12, 13, 14—he's like, 'Yeah, I'm ready,'" he told Scene's Matt Wardlaw in 2015. "So I take all my gear, all my cool gear out of my studio here in North Carolina, load it in the car, drive up there and plug it into all his stuff. And between the two of us, we create pretty good racket."

At a 2000 show, Stanley expressed gratitude to Walsh appearing on these records, "because nobody knew who the hell I was, but they said ,'Oh, Joe Walsh is on it, I think might check this out and listen to it.'" Locally, however, Stanley was already on his way to stardom.

"Michael was one of the good guys, and I loved watching him perform," says Donna Halper, an associate professor of Communication and Media Studies at Lesley University who was a music director at WMMS in the early 1970s. "You might think the WMMS audience back then wanted only hard rock, but that wasn't always true. There were certain singer-songwriters who were very popular, and Michael Stanley was one of them."

Like Gleason, Halper points to Stanley's songwriting as one major reason why people gravitated toward his music. "As a music director, I can tell you that our listeners really related to his lyrics. That's why 'Let's Get the Show on the Road' resonated with our audience, and we got endless requests for it." Adds Fox: "You know, Michael in the end, was a troubadour. He really was. He sang his stories."

Stanley emphasized this aspect of his musical life in recent years. In addition to annual holiday shows with Donnie Iris & the Cruisers, he frequently performed songwriting-focused shows at the Music Box Supper Club. He fronted a band, Michael Stanley and the Resonators, and also had a popular cover band, the Midlife Chryslers.

Off the stage, however, Stanley was also a steady pop culture presence. As a velvet-voiced DJ on WNCX, programming an eclectic mix of classic rock, he was the evening commute companion for thousands of Clevelanders across the years. Later, he parlayed his TV work into nods at comedy: He threw a perfectly timed punchline in a Wayne's World-themed Big Chuck & Lil John Show sketch, and appeared on The Drew Carey Show in a bit that also featured Joey Ramone, Slash, and ZZ Top's Billy Gibbons.

Over the years, Stanley was also known for supporting local cultural institutions and endeavors. He had a close relationship with the Rock & Roll Hall of Fame—among other things, he was interviewed there in 2015—and in late 2020 teamed up with the Cleveland Youth Orchestra for a version of his "Another New Year’s Eve" that doubled as a fundraiser. He appeared with Benjamin Orr and other local music icons on a 1980s charity single, "The Eyes of the Children," and recorded "Here We Go Again," the official anthem of the Cleveland Browns' 1998 return.

At his alma mater, Rocky River High School, his photo was displayed proudly in the school's Hall of Fame, alongside fellow famous alums such as the MTV VJ Nina Blackwood. Stanley was a member of the Cleveland Association of Broadcasters Hall of Fame, won eleven local Emmy awards and received the Cleveland Arts Prize Lifetime Achievement Award in 2019.

Stanley's songs also continued to resonate. During a 2017 appearance at what's now the Rocket Mortgage FieldHouse, country star Eric Church and his band did a smoking version of "My Town" that captured the urgency and hometown pride of the original. Two years later, Metallica's Kirk Hammett and Robert Trujillo did an in-concert jam to the James Gang's "Funk #49" and "My Town" while in Cleveland.


In March 2020, Stanley and the Resonators did a show dubbed 'Stagepass Revisited' at the Akron Civic, which ended up being the band's final gig before the pandemic shut things down. Video from that show, however, shows an ecstatic audience.

"The Springsteen comparisons are old and tired, but he did have one thing in common with Springsteen and that was the ability to relate to the crowd," Fox says. "I think Michael was well-known for that, actually. He was just fun to see. He had a great time on stage and he let it show. He totally, totally brought the audience in. That’s what you want to do, ultimately, as a performer: You want to give the audience something to relate to. Something that they can listen to and go, yeah, right, I get that."

Still, it can be difficult to explain to people outside of Cleveland why Stanley connected so deeply with local audiences—and maintained this connection for so long. The bond he had with fans was special; and there was something intangible built into his music that felt synonymous with Cleveland itself. Seeing Stanley live only cemented this fact.

With additional reporting by Matt Wardlaw