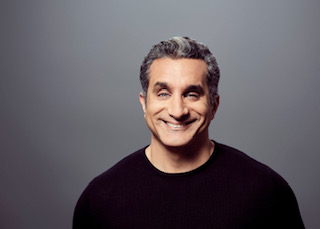 Egyptian comedian Bassem Youssef hasn’t let the pandemic get in the way of his standup tour. Just this year, he’s played gigs in New Jersey and Florida.

He’ll appear at the Funny Stop in Cuyahoga Falls from Thursday through Saturday. Tickets to Youssef's shows are on sale now.

Youssef, a surgeon who was offered a job at the Rainbow Children’s Hospital shortly after he graduated from medical school some ten years ago, entered the world of political satire when he launched a show on YouTube that led to the most popular political satire show in the Middle East, Al-Bernameg. While doing that show, Youssef was arrested and interrogated; he eventually fled the country for the States just in time to see Donald Trump elected President.

Currently, Youssef, who just published his first children’s book, The Magical Reality of Nadia, is working with Powerhouse Animation Studios to adapt the book as a television series. Youssef also stars in the web series Plant B that explores how diet can radically improve one’s health. The series features information from some of the world’s most respected doctors, researchers, and individuals who successfully changed their lives after following a plant-based diet.

Youssef recently spoke about his career and what to expect from his standup shows during a call from Los Angeles International Airport, where he was waiting to board a flight to Dubai.

Most touring has been on hold. I’m wondering what kind of reaction you typically get when you tell people you’re hitting the road during the pandemic?
Half of them tell me I’m crazy, but the other half tell me they’re excited to come. We’re performing with limited capacity and with safety precautions. People are glad that they’re coming out to laugh.

Where do live now?
I’m in Los Angeles, where I’ve been for the past four years. I love it here. You know, I almost ended up in Cleveland. I was heart surgeon, and I passed my exams and got accepted for a fellowship in Cleveland at the Rainbow Children’s hospital. I specialized in pediatric heart surgery. I was waiting for the papers. The revolution happened, and I started doing the media stuff and it went off from there.

Talk about making the transition from surgeon to political satirist.
I had no idea what I was doing. It just happened. Now, I’m doing another reinvention because I’m doing standup for an audience that doesn’t know me. It’s interesting to find myself in the middle of Maryland where people don’t know who you are. It’s been interesting but amazing.

Looking back on it, do you have some sense of what would’ve led you to embrace political satire?
I don’t know. The opportunity presented itself during the marginal freedom we had during the revolution. It’s been amazing since then. You get to do something that nobody else has done. With all that’s going on, it offers an incredible amount of material everyday.

Can you summarize the three seasons of Al-Bernameg? What was that time period of your life like?
I was arrested and had my show cancelled twice under the military. I don’t know if you can even call it three seasons because sometimes it would end after just one episode. It was all very interesting.

You came to the U.S. in 2015 and then served as a resident fellow at the Institute of Politics at the John F Kennedy School of Government for one semester. What was that experience like?
America was in the turmoil of the 2016 election. People were looking to [Egypt] for guidance or as a cautionary tale. I was in a unique position. That’s where my interest in standup comedy. I started doing standup comedy in different languages. It’s not like regular standup comedy, but it’s more like my life story. The first act is me and the second act is me coming here under Trump. I tell stories about being misunderstood in both acts.

You also appeared on The Daily Show with Jon Stewart. Talk about your friendship with him.
He is amazing. People focus on the fact that I was on his show four times, but he came to my show in Egypt. That, to me, was validation. He was someone I looked up to and my idol. He came to see my work. When he came on stage, he had a standing ovation for a few minutes and people were going crazy for him. I remember him telling me after the show that I could’ve never imagined that a short Jewish guy from New Jersey would be received that way in Egypt.

Talk about your children’s book.
It was inspired by my daughter. It’s about empathy and courage and friendship. It is an incredible story of magic and history and time travel. I enjoyed writing it.

Do you have other projects in the works?
You’re in Hollywood, so you’re always pitching ideas. I have an idea for an animated series. I’m also hoping for a standup special, and I have another show that talks about immigration in America that I pitched to HBO.