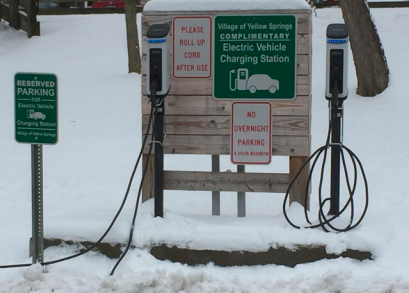 The Ohio Environmental Protection Agency has announced roughly $3.5 million in grants across the state which will fully or partially fund the installation of 170 electric vehicle charging stations.

Cuyahoga County is slated to receive 22 of them, more than any other county statewide, including locations at the Cleveland Metroparks Zoo, the Legacy Village shopping center, Hopkins International Airport, the Cleveland Ward 1 Recreation Center and the Church and State residential development in Ohio City. Roughly a third of the county's new stations will be located in the City of Cleveland.

Visitor parking lots at local healthcare institutions will receive several of the new stations. Included among the Cuyahoga County locations are the MetroHealth Medical Center, Euclid Hospital, the Independence Family Health Center and family health and surgery centers in Strongsville and Beachwood.

Four Cuyahoga County suburbs received grants for the new charging stations as well. The cities of Bedford, Lakewood, North Royalton and South Euclid will all get stations. South Euclid plans to install theirs at the suburb's City Hall. A full list of the grant recipients and the proposed locations are attached below.

The Ohio EPA grants are awarded from the state's allocation from the Volkswagen Mitigation Trust, (part of the settlement agreement from the Volkswagen emissions scandal). They are designed to improve Ohioans’ access to electric vehicle charging infrastructure. Cuyahoga County was among the state's top priority counties, alongside those clustered around Columbus and Cincinnati.

For most electric vehicles, the Level 2 charging stations add about 25 miles of range per hour of charging.

See related PDF OhioEPA_EVcharginggrants.pdf
***
Sign up for Scene's weekly newsletters to get the latest on Cleveland news, things to do and places to eat delivered right to your inbox.