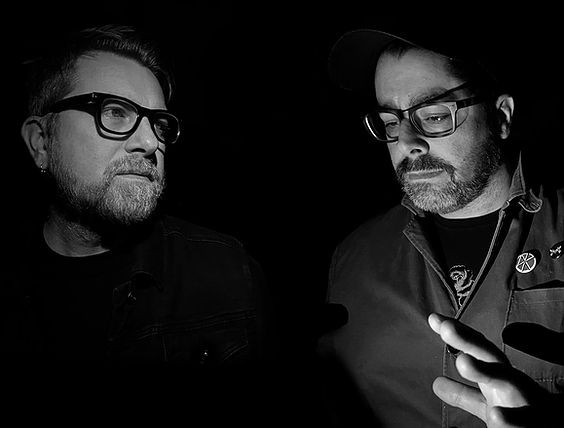 Update: Earlier this year, the local synth rock act Golden Streets of Paradise released its conceptual new full-length album, Throes. Now, it's followed that album up with a three-song mini EP centered on the single "Collide (Bury My Heart)." The EP also features two previously unreleased mixes of album tracks, "When This Light Burns Out (Hotel Room Mix)" and "West Side Dives."

The band has also just released a video treatment for "Collide (Bury My Heart)," in which the duo are hunted by a "rakish character" across a desolate winter landscape.

"I think it was the last song written for the record," says the band's Adam Boose in a statement. "[It's] one of those chord progressions that just moves me,[and it's] maybe our prettiest song yet. I was feeling heavy Banshees vibes, playing my drum kit with mallets and brushes. There are a couple synth tones we created in this song that I’m really proud of."
Original Post 1/14/2021: The local indie rock act Golden Streets of Paradise will release its new album, Throes, this week on Steadfast Records.

The Church-meets-the-Cure title track, the first song the group wrote for the album, set the tone for the tunes to come.

"There are some intentionally dubby and chaotic Skinny Puppy moments on ['Throes'] in the framework of an almost Zeppelin-esque ballad," says the band's Adam Boose. "We knew when we stumbled upon some of these sounds that we were making a different record than [2016's] World War. We didn’t know if it was better or worse, but it felt like the proper artistic direction to take."

The group recorded and self-produced the album over the last year and a half.

Avoiding excessive digital processing in favor of organic sounds, live synths, and drums, the album features "a snapshot of a universally relatable sorrow, one honed in isolation, loss and fear."

"We had a vision for this record shortly after our first one came out," says Boose. "We wanted to do something slower and also faster, a lot of acoustic guitar, feedback, and percussion; something honoring that early '80s Siouxsie and the Banshees stuff."

The band wrote the song "Heavy Hands" at Boose's old apartment near the lake and made good use of the room's natural acoustics.

"I love how relentless it ends up getting, like a foot on your chest," says Boose. "Lots of drum overdubs utilize [local singer-songwriter] Brian Straw’s giant concrete stairwell for reverb, which ultimately informed the sound of the record."

It will also be available on limited edition eco-wallet CD and blue shell cassette.