With the Addition of Pearl's Kitchen, Sauce the City Food Hall in Ohio City is Fully Occupied 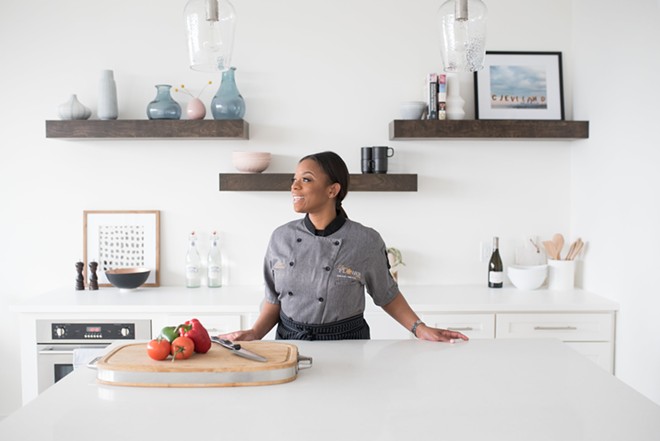 In 2018, Tiwanna Scott-Williams had the confidence to step away from her career as a cardiothoracic surgical nurse to pursue food fulltime. After juggling careers as a registered nurse and owner of PearlFlower Catering, the effervescent entrepreneur decided to put all of her eggs into a single basket.

“I had to make a decision,” she explains. “The side hustle gradually took over.”

A proponent of slow and steady growth, Scott-Williams took her first tentative non-catering step as a participant of the Launch Test Kitchen program at Rocket Mortgage FieldHouse. In 2018, the chef’s Pearl’s Kitchen concept was bumped up to a full stand for the following season. Of course, the season after that – 2020 – proved to be a bust for all vendors.

But then Victor Searcy Jr. of Sauce the City invited Scott-Williams to join him and his colleagues at the Sauce the City Food Hall (1400 W. 25th St., 216-795-5033), formerly known as Ohio City Galley. Since taking over management of the food hall, Searcy recruited Good Meal Jane and Twisted Taino to also set up shop.

“Starting at the Sauce the City Food Hall is really good for me because it’s pretty turnkey; it’s like a food court kind of similar to what was going on inside Rocket Mortgage FieldHouse,” she says. “It’s not just me in a stand-alone brick-and-mortar restaurant.”

Scott-Williams says that fans of easy-going comfort food will love her cooking.

“I like to call my style of cooking comfort food, but I don’t like to give comfort food a definition,” she explains. “I think it’s just food that makes you feel happy and feel good. It’s simple in preparation.”

“It’s not a huge menu; I wanted it to be short and sweet,” she adds. “I’m always about quality over quantity.”

As Sauce the City Food Hall continues to gain traction and attract foot traffic, it might once again be able to fire up the adjacent barroom. Searcy says that he has applied for a liquor license that would make way for a “totally new bar system never seen in Cleveland.”