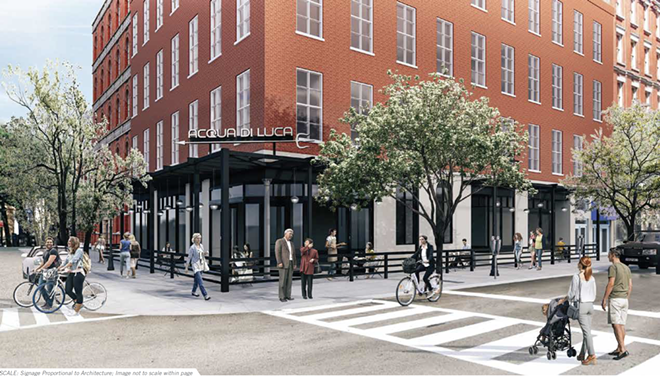 When the doors open to Acqua di Luca, the latest restaurant from Lola and Luca Sema, diners will experience an interior that bears almost no resemblance to its predecessor, XO Prime Steaks. For six months, construction crews have been busy stripping away decades of interior accretions, shoring up defective structures, and clearing the way for the finish work to begin.

“We didn’t know it was going to be so much work, but we had no choice,” says Lola.

Crews stripped the 7,000-square-foot space down to the exposed-brick shell, replaced a majority of the floor joists, removed elevation changes from room to room, installed new HVAC and made the sprawling basement level suitable for prep and storage. Once the space finally revealed itself to the Semas, design plans changed to match.

“We didn’t know it was brick,” Lola explains. “Originally we were going to do an Italian farmhouse in the city feel. But when this was all discovered, we said let’s keep it industrial. These are things you can’t buy anymore.”

In addition to the exposed brick walls, wraparound windows and lofty 20-foot ceilings, there are a pair of sturdy 100-year-old wooden support columns that had been whitewashed. The newly stabilized floor of the 137-year-old building will be covered in fresh hardwood.

In terms of more practical changes, the Semas decided to relocate the main entrance from the prominent corner at W. 6th and St. Clair to the eastern end of the restaurant. The move, says Lola, frees up prime real estate in the main barroom that gets lost to the host stand and come-and-go traffic. It also results in a larger valet zone.

Inside, the bar will be transferred to the other side of the room, providing those seated there with more appealing views. A large open kitchen is being built in the rear of the dining room. And new accordion-style nano windows will fold out of view to unite the interior with the wraparound sidewalk patio.

When Acqua di Luca opens in mid-May, it will be a seafood-focused Italian eatery. A daily selection of fresh oysters, specialty pizzas and desserts will
round out the menu.

“It will be Italian-style seafood with sauces and pastas,” notes Lola. “This wouldn’t be the place to get lobster tails and butter.”

The Semas also operate Luca West, which they opened in 2017 in Westlake.

Despite the fact that the opportunity presented itself in the middle of the pandemic, Lola says that she and Luca knew it was the right thing to do.

“I love this spot,” she says. “There’s no place I’d rather be. W. 6th is the heart of the city. This will be the first time that people can actually walk to our restaurant. At both places, everybody has to drive there.”