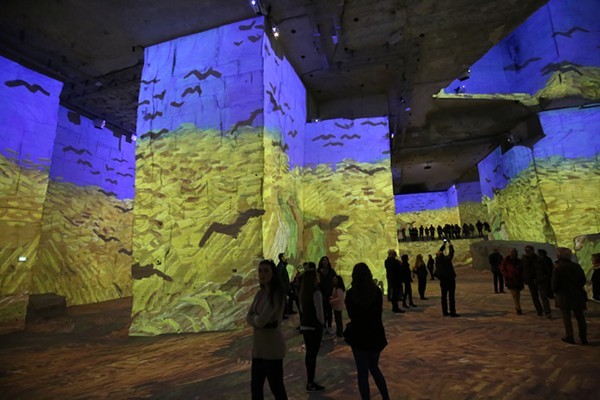 The venue has not yet been announced but they have announced the exhibit will open Sept. 9th.

(Original post): Let Gogh of what you think an art museum experience should be and, instead, immerse yourself in the moving, breathing, and unexpectedly trippy works of one of the world's most celebrated artists.

After successful runs throughout the country, including in nearby cities like Chicago and Toronto, Immersive van Gogh will make its debut in Cleveland. The multi-sensory experience (meaning there's sound, too, thanks to composer Luca Longobardi) features 500,000 cubic feet — and 90,000,000 pixels — of larger-than-life projections ripped straight from the portfolio of iconic artist Vincent van Gogh.

The digital exhibit, designed by Massimilano Siccardi, has a habit of, well, selling out — unlike van Gogh, who struggled with poverty and, according to popular art lore, allegedly only properly sold one painting during his lifetime. For example, Chicago's Immersive van Gogh exhibit is currently sold out through June, but will be on display until September.

In addition to traditional tickets, Immersive van Gogh offers date night packages and yoga opportunities, though it is unclear if these offerings will be made available during the Cleveland run. Tickets in Chicago range from $39 for a basic timed ticket to $99 for VIP tickets, which include flexible admission, priority access, limited edition poster, VIP souvenir laminate, and van Gogh cushion.

No dates or locations have been announced. But, fear not. There's no need to keep your ears, er, ear to the ground, as you can sign up for ticket announcements and Cleveland-specific event updates by visiting VanGoghCleveland.com.

You can take a peek as to what the Immersive Experience looks — and feels like — below.