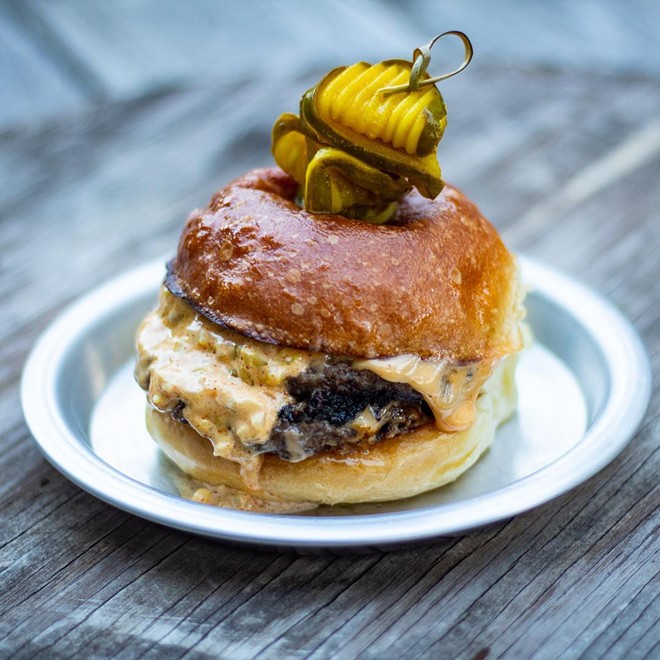 BottleHouse owner Brian Benchek has now squared away the food service at both the east and west locations of his brewery.

In Lakewood (13368 Madison Ave., 216-926-0025), chef Michael Schoen has taken up residence in the kitchen (216-401-9473), where recently he launched Eugene "Home of the Tinman burger.” That burger, if you will recall, was one of the most popular food items sold at the Ohio City Galley. That ridiculously delicious double cheeseburger is joined by fish fry hoagies, crispy chicken hoagies, fried chicken tenders, vegan diner burgers and various snacks and sides (including the dreamy shoestring onions).

Eugene is now serving, but will expand to six days a week on Tuesday April 13, including late-night service on weekends. Sunday brunch will join the lineup soon.

Out east, the kitchen is being prepared for a new food concept as well. Farmer’s Feast, which will debut on May 1, is a partnership between Rasul Welch and Colin Brown, two community-minded culinary professionals. Welch, who has worked as a chef, photographer and events pro, joins Brown, who runs Gifted Grass farms in Medina, where all pastured animals enjoy “the gift of grass.”

“It’s been important to both of us to build community through delicious food,” Welch says. “One of the big focuses is to provide folks with delicious, reasonably priced options in Cleveland Heights, but also to keep as much of the money they spend as close to home as possible.”

Plans call for a “virtuous cycle” between brewery, farm and food, in which spent grains and lees from the brewing process is fed to the animals, which in turn make their way back to the brewery in the form of meat.

Farmer’s Feast will be a counter-service operation available for dine in and carry-out. Welch describes the fare as “Ohio favorites with a little international flair.” Diners can look forward to patty melts on fresh-baked focaccia, Sloppy Joe with jerk seasoning, char sui on cornbread, and PBJ on Malaysian paratha.

The shop will be open five days a week to start, with brunch and additional days to come later. Welch and Brown also have plans to set up a small retail area that will carry locally produced goods like meats, bakery and dairy.