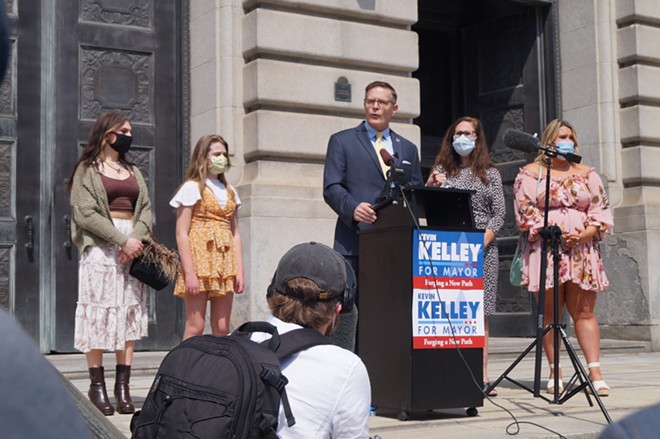 On the steps of City Hall, Cleveland City Council President Kevin Kelley made official what has long been anticipated: He is running for mayor.

Calling the 2021 race the "most important municipal election" of our lifetime, he said he possessed the "knowledge, experience and commitment" to enact big ideas as Cleveland emerges from the ravages of Covid-19.

Kelley appeared alongside his wife Elizabeth and three of his five daughters. He leaned on his history as a social worker, and highlighted council's recent legislative efforts to make the city a more equitable place: declaring racism a public health crisis, passing right to counsel legislation for evicted tenants, funding infant mortality initiatives, and passing the long-overdue lead safe ordinance.

His number-one policy priority, which he cited in both prepared remarks and in a question about how he'd spend federal coronavirus aid, is ending the digital divide. He said he wants to invest in Cleveland's biggest assets — its people — by preparing young people for family-sustaining jobs and by partnering with local businesses and industry to rebuild a thriving region economically.

"My strategy does not rely on outside forces that will come in and save us," he said. "My strategy relies on investing in people and assets that are currently here."

He paid his due respects to Mayor Frank Jackson — "He was the right Mayor at the right time," Kelley said — but believed that it was time for Cleveland to "forge a new path." Forging a new path, incidentally, appears to be his campaign slogan.

Ideastream's Nick Castele pointed out that some might be inclined to consider Kelley a continuation of the existing path, seeing as he's been a city leader for many years. Kelley said he had no control over what others might say, and reaffirmed his pride in his record on Cleveland City Council.

He said that during his ward-by-ward listening tour, the biggest issue that Clevelanders raised was public safety. Kelley said he wanted to support officers, improve the sex crimes and domestic violence investigative units, return to effective community policing, and in general create neighborhoods where everyone feels safe.

Kelley has an enormous campaign war chest and the backing of many within the corporate community, the constituency Kelley has most reliably defended on council.

He released a video on social media announcing his candidacy.

Today, I am proudly announcing my campaign for Mayor of Cleveland. pic.twitter.com/R4qhkchwfy