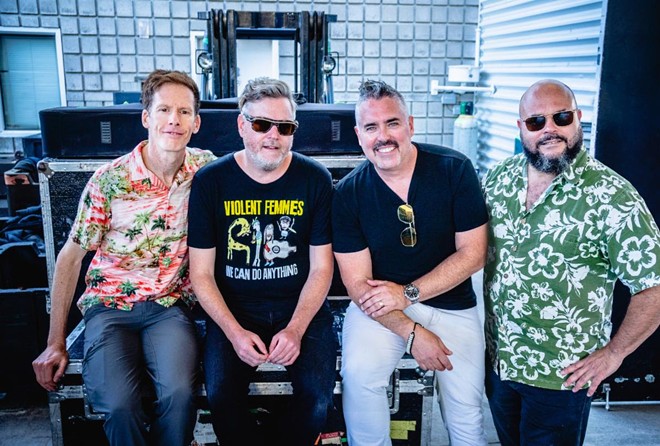 Update: Barenaked Ladies originally intended to bring their annual Last Summer on Earth Tour with Gin Blossoms and Toad the Wet Sprocket to Jacobs Pavilion at Nautica in July of last year. After the pandemic hit, they bumped the entire tour to 2021.

The 2022 jaunt still includes a Cleveland stop; however, and BNL will perform on July 2 at Jacobs Pavilion at Nautica.

Tickets purchased for 2020 shows will reportedly remain valid for 2022.

Original Post 1/17/2020: Barenaked Ladies will once again bring their annual Last Summer on Earth tour to town this summer. The group performs on July 3 at Jacobs Pavilion at Nautica.

Gin Blossoms and Toad the Wet Sprocket will join BNL for the gig.

"We're looking forward to getting back out on the Last Summer on Earth tour," singer-guitarist Ed Robertson says in a press release announcing the dates. "Having Gin Blossoms and Toad the Wet Sprocket out with us is going to be a blast. That's a LOT of hits per night!"

The group will also release new music in May.

This will be the sixth edition of the tour that the group founded in 2012, the year that the Mayan calendar predicted would be the last.

"We know the Mayan Calendar was wrong about the end of the world," adds Ed Robertson, "but could they have been THAT wrong?! C'mon out and rock with us like it's your Last Summer On Earth!"

The band also just launched Barenaked Bytes, the official Barenaked Ladies app. The app will have news, information, and merch, and fans who download the app will have first access to tickets and VIP packages starting at 10 a.m. on Tuesday.