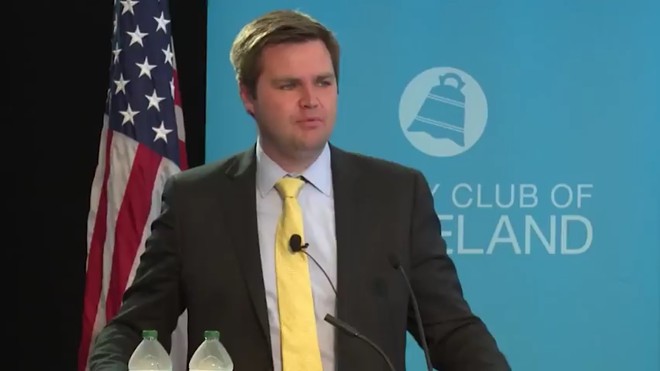 Hillbilly Elegy author and venture capitalist J.D. Vance has told friends and associates that he intends to enter the race for U.S. Senate in Ohio, Axios has reported. Vance has been expected to don his spandex and enter the cage match to replace Rob Portman for weeks, at least since tech billionaire Peter Thiel threw $10 million into a political action committee supporting him.

Vance will join a psychotic band of Republican hopefuls that now officially includes former state GOP chairwoman Jane Timken, car salesman Bernie Moreno, businessman Mike Gibbons and balls-to-the-wall Trump flunky Josh Mandel, all of whom are prepared to debase themselves as necessary to secure the endorsement of Donald Trump.

The Yale-educated Vance, who went to Yale, has weirdly assumed a populist anti-big-tech posture as he's made the media rounds in recent days. (He is now sporting a full Midwestern beard.) The reason that's weird is because Vance is a venture capitalist getting paid by Silicon Valley execs, and his campaign is more or less exclusively financed by a tech billionaire.

As Axios predicted, Vance will have a hard time "out-Trumping" Mandel, and thus will likely bill himself as a tamer option for the business class, a so-called "bridge between Trump and moderate Republicans." But he'll have to withstand the mockery of his opponents, who will be keen to point out the hypocrisies and contradictions that he exemplifies. It remains to be seen how central "cancel culture" rhetoric will be to Vance's campaign, who has historically been more of a "pull yourself up by your bootstraps" guy.

Vance was born in Middletown, Ohio. His memoir Hillbilly Elegy was a New York Times bestseller and was, last year, adapted into a Netflix film starring Glenn Close and Amy Adams, both of whom acquitted themselves honorably given the low-watt source material. Its most significant accomplishment was inspiring a much better book: What You are Getting Wrong About Appalachia, by Elizabeth Catte.