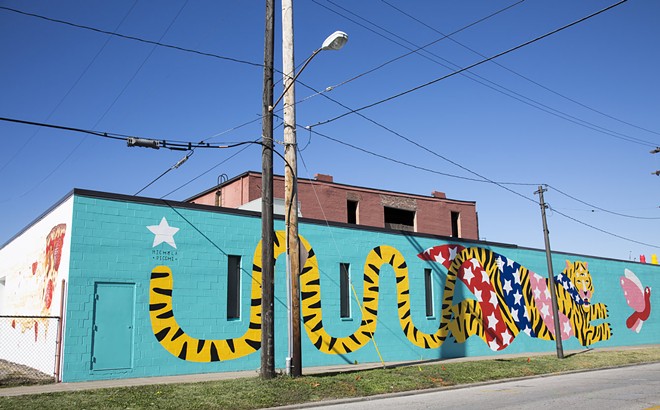 Since last November, Doug Katz has been sharing his version of Indian-fusion food from a ghost kitchen in Cleveland Heights. Come next November, he will be doing the same from a brick-and-mortar space in the Hingetown neighborhood of Ohio City.

That space is developer Graham Veysey’s “Tiger Building,” so named for artist Michela Picchi’s colorful tiger mural that graces the exterior. Katz feels that the Hingetown neighborhood is the ideal location for the full-service version of Amba.

“We want to launch both Chimi and Amba as concepts, but to me Amba is a perfect fit for what Graham has created in Hingetown,” Katz explains. “It is a very cosmopolitan neighborhood with a lot of diversity throughout. I think Amba being an Indian-fusion concept really works well in that type of neighborhood.”

Katz once again is teaming up with designer Kelly Shaffer to transform the 4,800-square-foot space, a former printing press, into a unique restaurant with a ton of personality. Much like they did in Cleveland Heights with Zhug, Katz and Shaffer hope to create a one-of-a-kind destination.

“Where Zhug is a really bright, sort of urban-looking space, Amba will be more of a hidden gem type of thing where you don’t really know what you’re walking into,” Katz says. “We’re working again with Kelly Shaffer and she’s creating some really fun aspects with lights and with using the masonry brick to transform it into a space that’s sexy, a little dark, and with great music.”

The main dining room will have a bar and semi-open kitchen. A separate barroom will offer a different, more casual atmosphere where guests can enjoy small plates and drinks before or after the meal.

“It will be set up in the same way that Zhug is set up, where you’re walking in, you’re having a great time with people, and you’re sharing food,” Katz says. “You can make a full meal of it or you can come in for just dessert or appetizers. You can start your night there or finish your night there. The idea is that it’s another great stop in the neighborhood.”

Katz says that fans of the virtual version of Amba can look forward to an expanded, transformed menu when the restaurant opens in late autumn. The Cleveland Heights ghost kitchen was more aligned to take-out and delivery friendly dishes, he says. And while Amba will be going away there, Chimi will remain.

“We’re certainly going to be doing the ghost kitchens at the diner for as long as we can, but Amba will go on hiatus so people can really get excited for what’s new and what it will evolve into,” he says.

Veysey says that he’s thrilled to be able to bring Katz to the neighborhood.

“Doug and I have known each other for over a decade, ever since I first moved back and fell in love with his cuisine at Fire,” Veysey states. “To have that level of excellence in Hingetown is really something we’re thrilled about. I’ve been trying to get Doug in the neighborhood for a long time, so we’re excited that we found the right spot and that the concept is perfect.”