Fasih Syed longed for the cookies, candy and fruit juices of his childhood growing up in Pakistan, so in early 2021, he and his family opened an imported foods market in Brook Park that stocks those nostalgic foods and more.

“This was really popular back home,” says Syed, pointing to a beloved spicy, sticky gummy treat. “We’re the first ones here to bring this in. When you come to the store, all your old memories come back.”

To be fair, the Syeds’ motivations to open CleaveLand Grocers are far loftier than simply indulging an expat shopper’s sweet tooth. After observing a noticeable dearth of reliable Halal food suppliers to serve the local Muslim community, the family decided to do something about it, even if they were cautioned against it.

“Our biggest motivation behind the store was the lack of Halal options in Cleveland,” explains Syed. “A lot of businesses have gone through this space before us. A lot of people told me not to take the building, but we just had to do it because of the need in the community for Halal food. It was a hard decision, but we had to make it for the community and ourselves. So we did.”

As the only Halal Food Standards Alliance of America-certified market in Ohio, CleaveLand Grocers adheres to the most rigorous standards of Halal. As Syed explains it, this ensures that any and every Muslim person can feel confident shopping at the store regardless of one’s personal definition of “permissible.”

That hasn’t always been easy. While Halal beef, goat and lamb are consistently available, fresh chicken is less so. When Covid disrupted the Halal chicken supply chain, it was learned that some suppliers had relaxed their slaughtering standards, potentially allowing non-Halal poultry to slip through and be commingled with the Halal birds. Rather than take any chances, CleaveLand Grocers ceased its sales of chicken, even though it disappointed a large number of shoppers.

In addition to the fresh meats, the spacious Brook Park grocery store stocks a wide variety of products from all over the Middle East. Many of the items sold here, according to Syed, had been previously unavailable to local shoppers.

“There is a huge Pakistani community,” says Syed, whose own family emigrated to the States when he was 15 years old. “But our goal isn’t to just cater to the Pakistani community, which is why we carry Pakistani, Indian and Mediterranean products. And it’s not just for them, it’s for anyone who walks into our store. Every customer is the same to us.”

The meats are joined by a produce section, candy selection, and shelves upon shelves of packaged products. There is honey, olive oil, ghee, ginger paste, dried fruits, pickled products, refrigerated dairy and a dozen different varieties of long grain rice, each of which boasts subtly different tastes, textures and aromas. Indian sweets like halwa tempt, as does a wide assortment of sticky dates. Those dates happen to be in high demand right now as they are the customary treat during Ramadan. 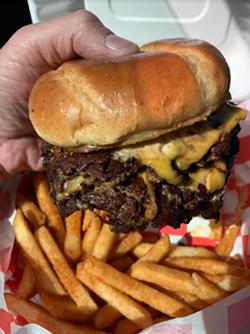 While I expected to discover a dizzying array of exotic food products at CleaveLand Grocers, I did not anticipate unearthing one of the most delicious hamburgers in Greater Cleveland. From an open kitchen in the front of the store, the crew whips up a small selection of cooked-to-order foods like grilled chicken wings, grilled chicken sandwiches, and those eye-popping cheeseburgers, all of which are prepared using Halal meat. The double smash burgers are made with beef that is ground fresh throughout the day. They are griddled until crispy before being stacked into a buttery brioche bun with cheese, grilled onions and special sauce.

While some shoppers might find it odd to find a mini-restaurant in a grocery store, Syed says it was always part of the plan.