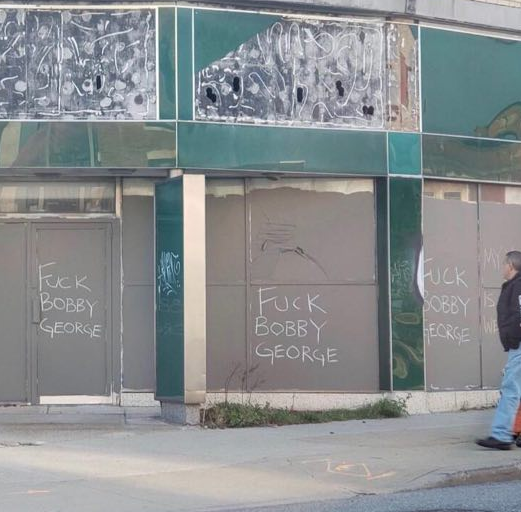 Our weekly roundup of minor but interesting happenings, stuff you missed, stuff we missed, and assorted fun.

- From a tipster in Scene's DMs: The building at the corner of West 25th and Detroit owned by Bobby George remains vacant except for the billboard perched atop its roof. Someone both willing enough to engage in graffiti and knowledgeable enough to know that the plot was envisioned to be part of the Irishtown Bend park project before George swooped in to buy it added "Fuck Bobby George" to the graffiti decorating the building recently. While the rest of the taggings remain, the offending words have since been scrubbed away.

- As the Cleveland mayoral race begins to hit first gear, the Greater Cleveland Reentry Leadership Coalition, the Center for Employment Opportunities, Towards Employment and Reentry Week community partners have invited candidates to a virtual forum next Wednesday, April 28, at 6 p.m.

“This nonpartisan mayoral forum is a great way for returning citizens and other community residents to civically engage with prospective candidates running to lead the City of Cleveland,” Rachel Durci, Site Director for the Center for Employment Opportunities, said in a statement. “With nearly one in six Cuyahoga County residents having a criminal conviction and over 7,300 residents committed to an Ohio state prison last year, it’s important that we uplift their voices and concerns. Candidates can speak to what they see as the most pressing issues and needs of this population and how they will work in partnership with them to address it.”

- A few weeks after promising to reopen playgrounds and put rims back on basketball hoops on courts with the arrival of spring, the city of Cleveland has made good on both fronts, much to the relief of basically everyone.

- This was from a week or so back but, via Cleveland.com, the owner of the Masonic Temple has sued Live Nation claiming the concert giant has used its muscle to prevent the near east-side venue from booking popular acts.

- Also from Cleveland.com: The Opportunity Corridor, still a scam.

The only reason I’m still on FB is my community’s crime page, which remains undefeated.

I have so many questions pic.twitter.com/qYK04r2Guj

- Why are some Clevelanders on the fence about getting the vaccine? Cleveland Documenters and the Cleveland Observer found out by actually talking to them.

- While demand for vaccines varies regionally within the state and country, local health departments have begun facing a new problem: Low demand. Summit County, for example, canceled a day of its mass vaccination operation at the fairgrounds because not enough people had signed up and Mercer County made a similar call for the same reason.

“When we do polling and we do focus groups, what we do not hear that frequently is people that are adamantly opposed to ever getting vaccinated,” Louisiana's health director told Politico. “What's much more common for us to hear is people that aren’t sure, they have questions, they're on the fence, they want to wait and see, they want to talk to people.”

Local officials are seeing the same thing and are now trying to design ways to reach people where they're at.

“It still remains a priority for us to vaccinate as many individuals as possible," Summit County Public Health Commissioner Donna Skoda told the Akron Beacon Journal. "We have to think of new and innovative ways to reach individuals who have not been vaccinated, so we are shifting some of our resources to more targeted initiatives."

- Also from Politico: Michael Kruse came to Strongsville for a feature on the simmering primary battle between Rep. Anthony Gonzalez and former Trump aide Max Miller driven by Gonzalez's vote to impeach the former president.

All of this makes Ohio’s 16th worth watching as an early, distilled look at the potential limits and pitfalls of Trump’s shoot-first, aim-later style, his personality-driven, fealty-fueled, viscerally scattershot politics of retribution. “Anthony’s disloyal, and Max will be a loyalist,” Hill said. “No more complicated than that,” confirmed a person close to Trump. “Trump is such an emotional decider,” former Ohio Democratic Congressman Dennis Eckart said. This nascent race then could help Trump cement a sweeping and lasting influence—or play out as a case study in the ways in which his inchoate urge for revenge might begin to run into reality.

20 million – Approximate total visitors to the Cleveland Metroparks’ 18 reservations in 2020, a record.

18 – Total deaths, as of April 12, on Cleveland’s streets, according to Vision Zero CLE, the local organization working to eliminate traffic fatalities.

43% — Decrease in number of children aged five and under enrolled in childcare in Cuyahoga County between September 2019 and September 2020, according to new research by Case Western Reserve University.

$585.31 – Amount, on average, that people in Ohio would spend to abandon their partner and kids for a week after a year-plus of quarantine.

- What did Scene dining editor Doug Trattner eat this week?

- Vintage photo of the week

- New local music of the week: "Different Story" by The Building, off Indianola Pizza Dough.