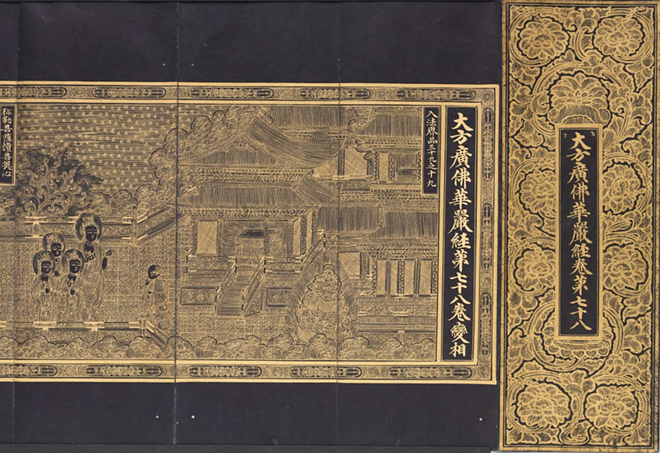 The Cleveland Museum Art will present, in the Korea Foundation Gallery, the exhibition “Interpretation of Materiality: Gold" beginning  Friday, April 30th and running through October 24th. The collection spotlights how gold and the precious metals' distinctive materiality has enriched Korean Art since the fifth millennium BC through today.

“This exhibit illuminates how Korean artists from ancient times to the present day creatively used and interpreted gold and its distinctive materiality” explains Sooa McCormick, CMA’s Curator of Korean Art. “One highlight is the 13th-century Buddhist text titled Flower Garland Sutra No. 78. Mixed with ink and glue, refined gold powder was applied on the smooth surface of the dark blue, indigo-dyed mulberry paper. In the practice of copying a Buddhist sutra, gold served as the perfect medium to visualize the splendid world of Buddhas and their awakening teachings. In June, a stunning sculpture titled Translated
Vase (2013) by a South-Korean artist Yee Sookyung, will join this exhibit from the Philadelphia Museum of Art, adding a compelling narrative about the contemporary interpretation of gold. Translated Vase consists of discarded ceramic fragments that the artist gathered from contemporary ceramic artists’ studios. Yee used 24-karat gold leaf to connect them and to fill in the cracks.”

Gold in Korean art can represent the brightest rays of sunlight. High-ranking officials and members of the Korean Monarchies, like in many other cultures, adorned themselves with gold in the form of jewelry, regalia and in diadems (crowns) to indicate their status or rank. As evident in royal tombs in Gyeongju, the capital of the Silla Kingdom, the elite deceased also were lavishly decorated with objects made of gold to represent their continuing high social status in the afterlife.

Koreans adopted the burial customs of the Chinese by burying their elite with luxurious goods. Many of the luxuries found in Silla tombs were introduced via the Silk Road which connected a vast terrain of ancient cultures and was where trade routes established during the Han Dynasty of China (202 BC-AD 220). The Silk Road was a cultural ‘viaduct’ bringing materials, techniques, and ideas from as far away as Rome. It was called ‘Silk Road’ because it is where silk went westward, and wools, gold, and silver went east.

“A small object in the shape of a dog-lion hybrid, which is believed to have been used as a paperweight, for example, was produced in the Three Kingdoms period (57 BC−668),” continues McCormick. ”The artist employed mercury amalgam gilding, a technique that involves mixing pure gold powder with liquid mercury to form a paste-like mixture. It was intended not only to embellish metal objects but also to make their surface resistant to acids. Other examples to highlight the creative usage of gold can be found in Goryeo-period celadon works. Some of the examples on view in this exhibit were repaired with gold lacquer called kintsugi (literally meaning “gold joinery”) in Japanese. This restoration method highlights broken parts with gold mixed with lacquer. Initiated in 15th-century Japan, the technique follows a popular aesthetic concept, which finds beauty in imperfect things.”

One work in particular is part of a manuscript which includes a panel of five figures in the foreground of what looks like a courtyard. The work is incredibly ornate and includes vertical, Korean text. It looks to be rendered in mostly gold on a dark background. The work is titled called, “Avatamsaka Sutra No. 78,”is included in the exhibition and is by an unknown creator. The people of Gorye-period medieval Korea were predominantly Buddhist and this portion of an illuminated manuscript, which are hand-written books with painted ornamentation that commonly including precious metals such as gold or silver, is a precious, luminescent example of works in the show representing an expansive lineage of artistic achievement in Korean culture.

From The Cleveland Museum of description:

This illuminated manuscript presents one part of the multivolume sacred text titled Avatamsaka (Flower Garland) sutra. Both the script and the image are rendered in gold ink on the smooth surface of the dark blue, indigo-dyed mulberry paper. This portion of the text, which reads from right to left, describes the encounter of the Buddha of the Future (Maitreya) and the young pilgrim Sudhana. The Buddha gives his words of wisdom to Sudhana, who asks questions about the path toward spiritual awakening. Mixed with ink and glue, the gold has a brilliance that strikingly reflects Sudhana’s ardent quest for understanding the way to reach enlightenment.


“Since the fifth millennium BC, artists across the globe found gold to be a perfect artistic medium due to its remarkable malleability and durability,” concludes McCormick. “In Korean art, gold was the main material, and since the Three Kingdoms period (57 BC−668), Korean artists used it variously. The wide usage of gold in an ancient Korean kingdom was well known to the world outside East Asia. In 'The Book of Pleasant Journeys into Faraway Lands,' the author Muhammad al-Idrisi (1099−1166) writes: 'Gold is too common in the Silla kingdom. Even the dog’s leash and the monkey’s collar are made of gold.' I would like our audience to know how each culture and art shared commonality, yet distinctiveness.”