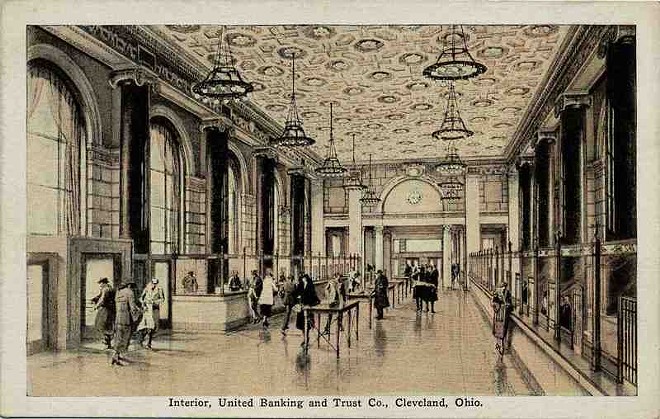 For the past decade, the historic United Banking and Trust Building at W. 25th Street and Lorain Avenue in Ohio City has been home to Crop Bistro. Before the end of the year, the stunning interior will become Bartleby, described by its owner as a “modern supper club.”

The new owner is Morgan Yagi, who also operates Hibachi Japan Steak House restaurants in Cuyahoga Falls and Solon. He says that when the prospect of taking over such an iconic Cleveland space presented itself, he was thrilled.

“It’s a beautiful, lovely space and we are super excited about the opportunity,” says Yagi. “It’s one of the best spaces in town.”

The breathtaking room, designed by renowned Cleveland architecture firm Walker & Weeks, features 35-foot ceilings, an original mural and a lower-level vault complete with imposing steel door. The goal will be to make the cavernous room more inviting while preserving its impressive framework.

“We’ve got some ideas that will hopefully warm up the atmosphere, but obviously the architectural features are great and we wouldn’t want to cover any of that up,” Yagi says. “Whatever we do will definitely be sensitive to the beauty of the space.”

For the project, Yagi has surrounded himself with a high-caliber team of friends (i.e. industry professionals) to create a multi-faceted restaurant, bar and private dining space. Colleagues who will be consulting on the project include Stephen Taylor of CBRE, chef Dante Boccuzzi and Spotted Owl owner Will Hollingsworth. Managing the restaurant will be Ryan Britton.

The plan is to open in phases, beginning in late 2021, says Taylor. The main-floor restaurant and bar will be followed by the lower level private dining spaces.

“There’s definitely going to be demand for larger groups, and I think it will continue,” says Taylor, a longtime restaurant real estate professional. “We definitely think Bartleby will be complementary with the other restaurants and operators in the neighborhood. And we hope to bring people in from the burbs, but also people who live and work in Ohio City and come to events downtown.”