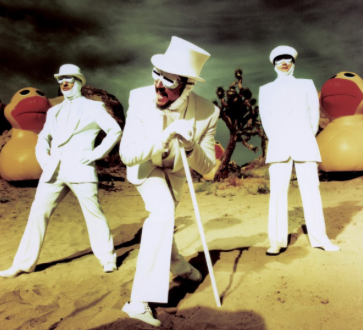 Update: We had been looking forward to seeing the alt rock act Primus pay tribute to prog rock pioneers Rush last summer on its Tribute to Kings trek, but the pandemic forced the band to cancel the show that would've taken place last year at Jacobs Pavilion at Nautica. Primus simply bumped the 2020 tour to 2021; it's now announced that it's pushed those rescheduled dates back to late summer and early fall.

It'll now perform on Sept. 17 at Jacobs Pavilion at Nautica.

Finally, the clouds are parting, the planets are aligning, the dough is rising…whatever metaphor floats your preverbal boat, PRIMUS is going on tour again," says frontman Les Claypool in a statement. "We were poised and ready for a massive, bent-rock extravaganza when the gremlins of covid came and yanked the rug out from under us all. I personally have been climbing the walls like a shit-house rat and, after my first season off in 30 some odd years, I’m very anxious and excited to stand in front of the microphone with my four string piece of furniture [bass guitar] and belt out some girthy ditties to sweaty throngs of punters."

Previously purchased tickets will reportedly be honored for the new date.

Original Post 2/18/2020: The alternative rock act Primus has just announced that it’ll take its tribute to the prog rock act Rush on the road this summer.