Savage Love: Should I Go to a Homophobe's Wedding? 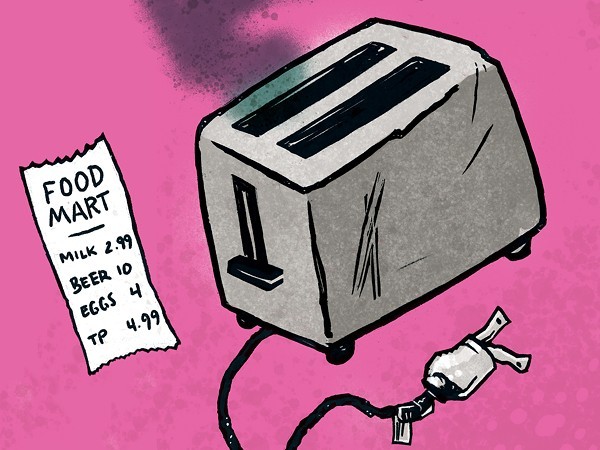 I have a quick question about bisexuality. What if one has a preference for dating straight individuals? As a straight woman, I'm only interested in dating straight men. Is that some kind of phobia? Or is it OK for that to be a preference? I've always wanted to ask someone this, but I'm afraid of being thought of as having a phobia.

My wife and I (lesbian moms together) have been invited to her cousin's wedding. She's marrying the son of a former Republican statewide official who, in the early 2000s, turned the power of his state against gays, especially gay parents. His son hasn't renounced his views — in fact, he's converted his fiancée, my cousin-in-law, to Trumpism. If it's relevant, they're more country-club homophobes than rednecks, they want to be seen as mainstream and pleasant, and they now live in a very liberal city and hide their views so they're not pariahs. Not sure how to handle — simply by not responding? Citing his father's views in the RSVP? Never going to any family function where they will be, ever? I really don't want my kid around these people, but also, I feel like maybe I should go to set an example. But then, wearing my best suit and tie to a Trump wedding deep in a red state makes me worried for my physical safety.

—What would you do?

I would send my regrets along with a broken toaster and the wrong receipt.

I have a cult fascination with the film Withnail and I. OK, I love this film. But I'm troubled by the perspective this film offers on homosexuality. It's not what one would call a "modern perspective." I believe the film's portrayal of homosexuality can be seen as funny or alarming or a cultural reference point. I think it's all three. My son is gay, and with some introductory apologies, I want to tell him to watch the film. Apologies for "trial ballooning" something like this with you, Mr. Savage, and I know you're not the standard-issue gay, as if such a thing exists. But have you seen the film? And if so, your thoughts?

I've never seen the film, but a quick Google search of "Withnail and I" and "homophobic" brings up nearly 100,000 results. Apparently one of the film's main characters (Uncle Monty) is a "predatory homosexual" who makes an unwelcomeseries of advances on one of the male leads. "Is the film homophobic? Yes, undoubtedly," Philip Caveney writes at Bouquets & Brickbats. Richard Griffiths, the actor who plays Monty, "somehow manages to evoke genuine sympathy for a tragic character who is, more than anything else, lonely — but all the talk about buggery by force does make you feel rather uncomfortable." The film was released in 1987 — which in no way excuses the homophobia, of course, but you'd be hard-pressed to find a popular film released in 1987 that wasn't deeply homophobic either by commission (the hateful portrayal of gay characters) or by omission (the complete absence of gay characters). Still, the film doesn't portray homosexuality, FOW; it portrays an individual homosexual. It was doubtless a damaging portrayal at the time, as there were so few other representations of gay characters on TV or in film back then. But viewed now — viewed at a time when there are more representations of gay people in film and television than ever before — it doesn't have the power to do the same damage. So go ahead and recommend the film to your son, FOW, with the appropriate qualifiers and apologies.

I just got dumped in a pretty brutal and inconsiderate way by a guy I really liked. He didn't want to tell me it was over; he just pulled away and left me to figure it out on my own. We were dating for a year, and he even started dating someone else and didn't bother to inform me — but didn't hide it from me either. I feel depressed and really sad because I still like him and I miss him, and I don't know what to do.

—Sad And Depressed Over New Ending

If he did that ... if he broke up with you like that ... you didn't like him. Not really. You liked the idea of him you formed in your head. He gave you the outline of a decent guy, and you filled that outline in with everything you hoped he was, i.e., a kind, loving, decent guy who was as into you as you were into him. Or at the very least, SADONE, a guy who cared enough about your feelings to end things in a kind and considerate manner if it came to that. You can and should feel sad about losing the guy you hoped he was, but don't feel sad about losing the guy he turned out to be. Because that guy was an asshole.

I was just listening to the Savage Lovecast (Episode 750), and you were responding to a fella who was ejaculating sooner than he would like. I wanted to say that I, a female, had a male partner who always came twice. Once was quick and he played it cool, and just owned that that was how he operated. We switched to a new condom and could go for much longer the second time! Own it, guys! No need for shame about your body's functionality.

It's good advice for men who suffer from premature ejaculation (PE) — don't try to stop that first orgasm, and you're likely to last longer as you build to a second — but that advice works better for younger men with shorter refractory periods. The older a man gets, the longer his refractory period becomes. If your partner's second orgasm took 12-24 hours to arrive, well, that's a long time to wait, no condom or no new condom. Older guys with premature ejaculation might want to try low-dose SSRIs, i.e., anti-depressants; one of the side effects of SSRIs is delayed ejaculation, and studies have shown that they're a pretty effective treatment for PE.

I saw your response to DTFOMBNB, the gay man who wanted an emotionally intimate, sexless relationship and the freedom to seek casual sex elsewhere. You mentioned asexuals and cucks as potential partners for the intimate-but-sexless-relationship part, Dan, but I wanted to mention another possibility: I'm a gay guy in my 50s, and I learned relatively late in life that I'm on the autism spectrum. Specifically, I have Asperger's syndrome. That diagnosis was part of what resulted from my first long-term cohabiting relationship, during which I found that I couldn't manage intense emotional intimacy and physical intimacy at the same time. I loved my boyfriend and cherished a lot of what we shared. I loved conversations, cuddling, traveling, etc. But adding sexual intimacy on top of all that just felt overwhelming. I can't say that my experience reflects those of all people with autism, but to me, what DTFOMBNB describes is similar to how I've envisioned any future relationship I might enter into. The bad news is that pretty much all of the relationship-oriented guys I've encountered on dating sites are looking for a relationship that combines emotional and sexual intimacy, so it's not an easy ask. But there are definitely men like me out there looking for what DTFOMBNB wants.

Considering how many people wind up in sexless relationships, ASPIE, it stands to reason that some not-insignificant percentage of the population wants a sexless relationship. But so long as people who want intimate-but-sexless relationships don't feel comfortable asking for it — so long as guys like you and DTFOMBNB assume no one else could possibly want what you're offering and so you don't offer, e.g., you don't put it out there on the dating apps — you're going to have a hard time finding each other.