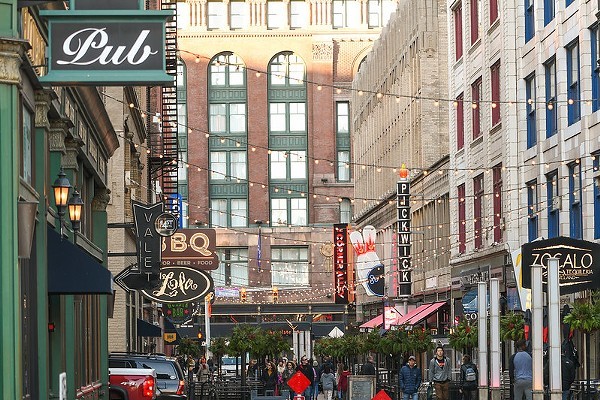 While some people are somehow surprised or angry that restaurant workers haven't returned in droves to the industry despite a glut of jobs, hospitality industry vets and experts aren't shocked at all.

The reasons why bar and restaurant owners are having a hard time filling open spots as the anniversary of the pandemic passed and vaccinations allowed patrons to return are very basic: low wages, the lack of benefits, no paid sick leave, and inconsistent or non-existent safety protocols.

Local workers who participated in a segment on the topic this morning on the Sound of Ideas, which was instigated by reaction to a segment on the same topic recently that featured only restaurant owners and operators, said the prevailing theory that workers are happy to collect unemployment instead of heading back to the job because they're simply lazy is simply wrong.

While operators cite a labor shortage and some in the general public lament the $300 weekly federal unemployment benefits, those who actually do the jobs cite the reasons that are actually causing the labor shortage. Like pay.

"I think it's not only a wage shortage for restaurant workers but it's also a shortage of benefits," said a longtime restaurant worker named Rosa. "In a pandemic, there's already health concerns, there are situations, especially if you work with the public, where you might be exposed. The lack of paid time off, even taking a few days, or sick leave that's paid, it's a huge burden. In this pandemic there's the idea in the public that restaurant workers are getting tested and quarantining, but from experience, knowing that you must quarantine if you test positive or are exposed, that has actually dissuaded people from getting tested, of not getting paid for two weeks. The lack of health insurance, it's not just about Covid-related health concerns."

While America eagerly looks forward to a return to normalcy and owners eagerly anticipate the return of packed restaurants after a year of capacity limits, temporary bans on dine-in service and a public wary of going unmasked indoors, the workers who took your orders and cooked your food dealt are reconsidering their end of the deal.

Jobs were lost in a cataclysmic wave and those that were left had servers dealing with unmasked patrons, enforcing guidelines, cooking in close quarters to serve the demand for take-out and doing all that without protections for their financial and personal well-being. And wages weren't good to begin with.

"Even in 2019 before Covid, restaurant servers were paid about $9.59, median, that's 93% of the poverty level for a family of three," Mike Shields of Policy Matters Ohio said on the program. "By 2020, there was very little change there. We're asking folks to do a job that is typically being paid at a rate that's not even poverty level, and now, today, in a context where Covid has made the pay worse at the same time the job is more dangerous."

Shields cited a survey that found 83% of restaurant workers had reported a decline in tips, more than 70% who said they experienced hostility from customers while trying to enforce rules, and 84% who said they had to stand next to unmasked customers every shift.

And while the emphasis has been on servers because the front-of-the-house staff is more visible, cooks have fared far worse.

"The front-of-the-house staff was basically told to go home when the pandemic hit," Rosa said. "But the back-of-the-house — the line cooks, the dish washers, the people working in close conditions — they kept working because there was demand for takeout, and they're being paid an abysmal wage."

And across the industry, as jobs disappeared last year, some simply looked elsewhere for work, and the kind of work that brought with it the protections that restaurants lack.

"I hear, oh, the shortage is because people are home on the dole," said Patrick Scullen, who changed careers and now works as an insurance broker. "I haven't found that to be true. I found myself in a new industry, and I know many people who have used this time to work somewhere else."

"I switched to a call center for a hospital group, and even though I make less money week to week compared to tips, when I got Covid, I got two weeks paid no questions asked," he said. "And even though servers may make a decent wage, it's the cooks, busboys, hostesses who I feel like can be taken advantage of in a restaurant setting."

Ohio's tipped workers make as little as $4.40 an hour, half of minimum wage, though tips are supposed to make up the difference to the regular minimum wage. Raising the minimum wage for all workers to a fair, equal amount would be a huge step in putting restaurant workers on the same playing field as everyone else.

Still, amid the ongoing pandemic, there are problems outside of wages on two fronts.

"There may be safety procedures in place, but some restaurant owners are not willing to sacrifice profits to ensure worker safety," said a caller named Justin. "We often hear the customer is always right. Well, most owners are loathe to anger their customer base."

"Whether owners are unsure of dangers or they don't care, if there's dining inside, you're eating and drinking without a mask. And as far as confrontations, that is absolutely the case. I marched up to a guest and gave him a mask, and he called back 15 minutes after he left and yelled at me," said Rosa. "And, some local owners don't believe [Covid] is a problem."

Now, all participants in the segment said, would be an ideal time to reevaluate the idea of tipped work and sub-minimum wage, which create a two-tiered system of labor and which dates back to post-Civil War Reconstruction.

"There are a whole host of problems that come from this, and it's unique to America," said Mike Shields of Policy Matters Ohio. "And it traces to slavery, and it's deeply racialized. It's really an example of one way we undervalue work, certain types of work, and because of the ways that we undervalue the people who are doing that work. We need to leave the practice behind."