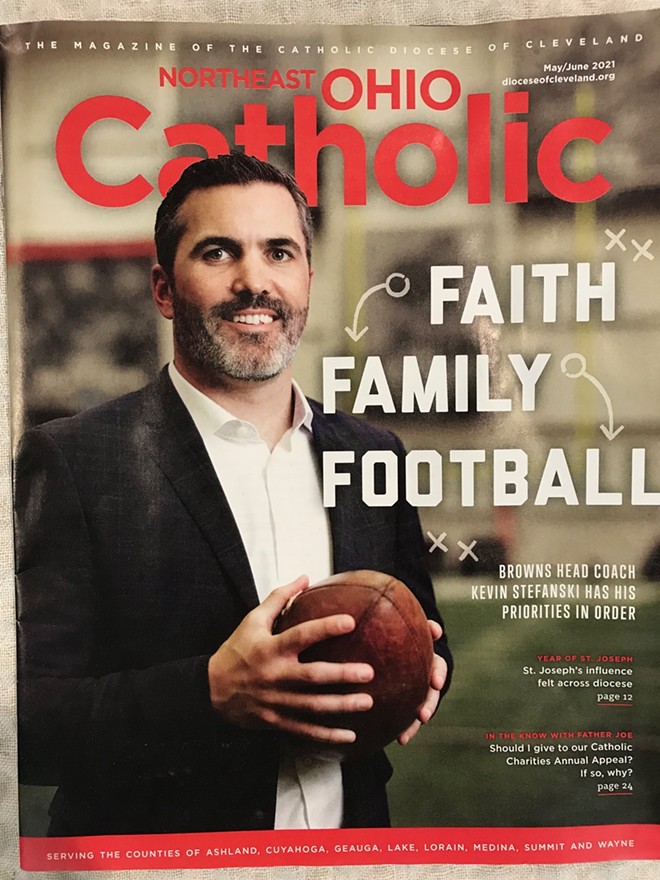 Our weekly roundup of minor but interesting happenings, stuff we missed, stuff you missed, and assorted fun.

- Kevin Stefanski, fresh off a season in which he led the Browns to their first playoff appearance since 2003 and first playoff win since 1994, for which he became the first Browns coach since Forrest Gregg (1976) to win the NFL Coach of the Year Award, has continued picking up wins in the offseason.

Stefanski is the latest cover star of Northeast Ohio Catholic magazine with a story on coach's faith — his family found a home parish at St. Luke's in Lakewood; he just met the team's Catholic chaplain, Father James Roach of St. John Cantius in Tremont, for the first time recently in person after a year of virtual team masses; his favorite childhood memories include serving mass and playing CYO sports. The article's not online yet but rest assured it's been eagerly devoured by everyone who gets a hard copy in their mailbox.

Stefanski also recently made the wise choice of stopping by Jaworski's Meats for some brisket and kielbasa as he continued Getting Us. God bless our Polish coach, indeed. Super Bowl, Super Browns.

I’m over the moon right now- Coach Stefanski just popped in the store and my Dad happened to have this Homage tee lying...

Posted by Nicolette Jaworski on Wednesday, May 12, 2021


- Speaking of meats and religion...

The Feds, in a recent forfeiture filing first reported by the Cleveland Jewish News, allege the owners of Tibor's Kosher Meats used the shop to launder illegal proceeds from a multi-state vape operation that included THC cartridges sold under the names Dank Vaptes and Dankwoods, both of which were linked by the CDC to severe lung injuries and deaths over a two year period.

- Clevelanders may think it can't get worse than Frank Jackson but they need look no further than Dover, OH for proof they're wrong.

The Dispatch reported this week that Dover Mayor Richard Homrighausen has basically be AWOL from work for more than a year. While suffering from unspecified ailments, the mayor has resorted to visiting City Hall for no more than 30 or 45 minutes a week, is often asleep while he's there, and has stopped responding to messages or completing vital city functions. While staff in various departments have picked up the slack to ensure the city continues to operate, there's little recourse available to them beyond that: city council can't boot him, and only a citizen-led recall effort could oust the missing, sleepy mayor.

- As vaccination demand slows down, it's worth remembering that not everyone who hasn't gotten a jab yet hasn't done so simply because they don't want one. For many, it's a matter of time and work.

I worked with @lorenanthes & Taneisha Fair on some research about hourly workers and vaccinations- the data is very compelling. ZIPS with high rates of hourly workers have lower vaccination rates. https://t.co/M8YgVnBB3W pic.twitter.com/9zVBAlHAXW


- A fascinating case is now before the Ohio Supreme Court involving the Cleveland Botanical Gardens. The heart of the question: Does the Botanical Garden's hours and admission fees violate the terms of the 1882 deed from Jeptha Wade that donated the 73 acres on the condition that the land be a park "for the benefit of all people" and "open at all times to the public"?

6,000 — Number of homes DigitalC, the nonprofit working to provide internet access in low-income neighborhoods, hopes to be servicing by the end of the year. It currently services 1,000.

60,000 — Nalaxone doses being distributed by the state of Ohio this month to 23 counties with the highest number of overdose deaths and overdose-related ER visits. Cuyahoga County will receive the most.

1911 — Year the historic Cleveland Harbor West Pierhead Lighthouse was built. The Feds announced this week it's no longer in need of the lighthouse for Coast Guard or Department of Homeland Security Needs and is offering the structure for free to an interested party (must be a state agency, historical or education organization, nonprofit, or parks service).

- Vintage photo of the week:


- New local music of the week: "Crack a Smile" by Learning Curve