By Vince Grzegorek and Marty Schladen, The Ohio Capital Journal 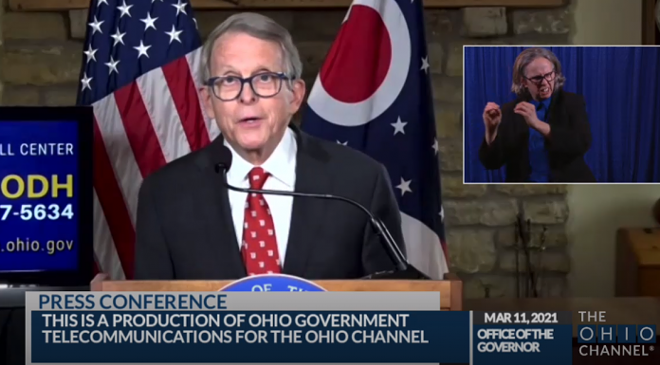 Citing fears that a $300-a-week federal unemployment supplement was keeping Ohioans from returning to the workforce, Gov. Mike DeWine on Thursday announced that he would end it.

However, the governor was unable to cite any data showing that businesses’ trouble finding workers was due to the supplement and not other dislocations caused by the coronavirus pandemic.

Ohio will join 13 other Republican-led states in cutting off the payments to hundreds of thousands of Americans even though the benefit is shouldered entirely by the federal government. DeWine said he will wait until June 26 to terminate the supplement so those who haven’t already been vaccinated can do so before re-entering the workforce.

The governor said he was undertaking the move because Ohio unemployment is near pre-pandemic levels and employers around the state are complaining that they can’t find needed workers. He said that problem is made worse because the extra $300 a week made some Ohioans calculate that it’s a better deal to just stay home.

“The federal assistance is in some cases certainly discouraging people from going back,” DeWine said.

That theme has been echoed by other Republican governors as they justify ending the benefit. DeWine’s move also was applauded by the National Federation of Independent Business, which has received hefty funding from the billionaire Koch family and in the past has fought laws requiring paid sick leave.

“Ohio’s economy is growing and growing faster than our neighboring states. We need a robust workforce to maintain our positive trajectory,” Roger Geiger, NFIB’s Ohio executive director, said in a statement. “The time for additional unemployment payments is over. We appreciate Ohio Gov. Mike DeWine for recognizing that now is the time to strongly encourage everyone to get back to work.”

But some independent experts have said the issue is more complex. They believe problems with child and adult care, ongoing disruptions in certain industries and other dislocations caused by the pandemic are keeping many on unemployment.

Republican governors are “misguided in their thinking about why people aren’t returning to work,” Rebecca Dixon, executive director of the National Employment Law Project, told the Washington Post last week. “There are all of these ways our care infrastructure is not back up.”

The argument that increased benefits are keeping people out of the workforce also doesn’t seem to be supported by the most recent employment numbers, Paul Krugman, a Nobel Prize-winning economist and self-described liberal, wrote Monday in the New York Times.

One would expect a $300-a-week supplement to most impact the behavior of low-wage workers. But Krugman pointed out that the April jobs report shows low-wage jobs like leisure and hospitality growing robustly while better-paid work in professional and business services actually fell.

Asked whether he had data showing that federal supplements are keeping large numbers of Ohioans on the unemployment rolls, DeWine said, “If you look at why jobs are not being filled, I’m sure it’s multiple reasons. But whenever you go in and the market is distorted in that sense, you have certain consequences when you do that and should do that when you have a crisis.

“And we’re coming out of the crisis economically… This couldn’t go on forever. The federal government was going to end this — unless they change their mind — they were going to end this in September. We’re moving it up a little bit. We think that’s the appropriate thing.”

Dayton Mayor Nan Whaley, who is seeking the Democratic nomination for governor, released a statement saying she emphatically does not believe that ending the federal benefit early is the appropriate thing.

“As we come out of this crisis, the problem facing Ohioans is the same one we had before coronavirus: wages are too low,” she said. “One good job should be enough, and for too many of our friends and neighbors, it isn’t. Mike DeWine is turning down money that could help Ohioans because he’s worried about politics. When I’m governor, I’ll be worried about paychecks.”