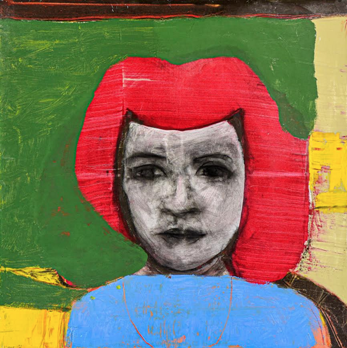 “AlmostREAL” merges two heavy hitting Cleveland artists into one optic orchestra. Liz Maugans brings her subtle wit, resplendent colors and contextual messaging, while Douglas Max Utter presents his somber reckonings drawing from family photos and television shows, conjuring up the past, both exploiting the observed moment with from and color.

“Almost Real is not so much a description of the work I do, or that Liz Maugans does, but is an attempt to emphasize the peculiar nature of the way that our various art practices respond to and use the events and furnishings of our lives,” says Utter. “Liz builds a network of allusions to her daily experience in some prints and drawings, and at other times creates richly layered scenarios of fragments that evoke bigger, more transformative life- situations. The intention was to generate the conditions for a new sort of potent psychological imagery that celebrated and mourned universal human events and emotions, on a level that could read as very immediate, personal, and process-generated.”

Utter is a timeless grand master of the ‘Cleveland order of artists who is also a writer, a poet and a teacher.

His piece “Thoughts of An Island” is an image of a young woman, stoic yet mournful, staring out at an ocean of trouble, resigned to a reprieve that is ever-evading. It features Utter’s quintessential stark white face detailed in black smear and shrouded by swaths of color and abstract shapes which he makes fall effortlessly into place with an abandoned which comes with a lifetime of experience.

There are a few self-portraits of Utter in the show. “Bathroom Mirror” depicts Utter, shirtless and vulnerable with his back turned on himself, his face weary. The back of his head is reflected while we see a white bird out the window perhaps to represent the loss of freedom which comes with age. White birds throughout history have been known to symbolize peace, purity, hope or the classic religious representation the Holy Spirit, which would not be far from Utter’s wheelhouse, as he periodically references religious iconography.

“Visit to Trempealeau” is based on a black and white Kodak photograph of Utter’s grandmother and his father when he was about 3 years old, along with two other family members, with a goat in the foreground adding a layer obscurity. The two women are in traditional garb with two young boys, one petting the horned, black goat. Two of the figures’ faces are smeared with red paint and two with blue distorting their image in Utter fashion. It is disturbing while still playful. In all of Doug’s work he provides a narrative evoking conversations, examination and contemplation. It is not so much in the subject matter of the images as it is in the poetry of color, texture and technique which bring together stunning works of contemporary art with all the transformative complexity we long for.

“Why a goat?” asks Utter. “There was no goat in the original photo, although there is another picture in the same album of my Dad when he was maybe eight years old, with his sister Ann, riding in a Little Rascals kind of cart pulled by the very same black goat, with long, biblical-looking horns. It is quite clear both in the photograph and in my work that these were not happy people, not at least on that day in their lives. But their existence is what fascinates me, the power and presence that they project, the common humanity that they so obviously share with just about anyone; and the fact that their blood flows in my veins, and other things – bits of knowledge and personal, family experience, tricks of speech, and appearance. Paintings are always about that – about the strangeness of life.”

Liz Maugans’ work is steeped in vivacious color, sometimes cryptic phrasing, and interludes of repetition of geometric shapes, and in this series, what she describes as ‘mouse holes’ in particular. In one piece, “Casseroles LIE,” she chose to add three digital scales in front of the piece which has two casserole dishes ‘tattooed’ on both thighs as we get the POV from the person weighing themselves. Perhaps this is a commentary on the struggle between body image and the gastronomic ecstasy.

“Drive-Thru” is a child-like rendering of what appears to be a tour bus constructed in the words — asymptomatic, stimulus, package, early, severance, EZ pass — intermingled with the cacophonic ‘blah’ we end up perceiving when over-stimulated by TV news or the radio, all interwoven to resemble a corncob on wheels. At the top of the frame there is a marquee reading ‘complacency,’ and the wheels spell out the word TOUR. This piece seems a subliminal commentary on the bombardment of facts, phrases and considerations which have overwhelmed us for the past 17 or so months in the midst of COVID-19 updates on practice and procedures. There is a construction cone in front of the bus indicating that all of this is a work in progress and we are still trying to overcome the worldwide PTSD which we all continue to process moving forward.

“For me, this entire series I am calling, 'Searching Baseline,' and is a return to painting and using an abundance of text as image,” reveals Maungans. “The acrylic plasticity in the paintings suggest a languishing, slow, carelessness that is offset in other areas by an obsessive tedium. In 'Meta Mucil Man,' sloppy, drippy applied paint the color of Pepto Bismol creates a lethargy in the inactivity of the Lone Ranger head perched, looking West, on the labored-over chaise lawn chair. The equal rows created in the grassy green paint suggest the pattern of a freshly mowed lawn. Regularity and routine reigns for the Lone Ranger.”

Whether is be through text, pattern, collage, screen print or paint, Maugans lets the world wash over her like bare feet on a shoreline syphoning out the water and contending with what’s left. She tells a story in a web-like arc verse and Shakespearean three-Sact play. The viewer must be willing to get on the bus with her, take the tour and let her guide.