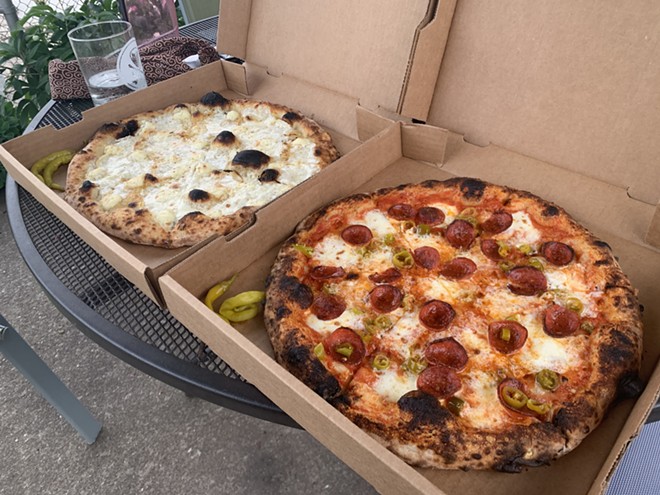 For nearly two and half years, we have been following the progress of Vincent Morelli as he has endeavored to open Cent's Pizza on the western edge of Ohio City. The ambitious project required a total renovation of the former PM Security building on Lorain (5010 Lorain Ave.) by the landlord. Like many projects, this one was stalled by the events of last year.

Now, however, Morelli has crossed a major milestone. While the shop won't be open until July for dine-in service, it has begun selling pizzas for carry-out. They must be ordered in advance for Friday, Saturday and Sunday pick-ups, typically selling out far in advance of the weekend. Here is the Square site for pre-orders.

For now, the menu is limited to four pizzas, including a white pizza topped with mozzarella, ricotta and garlic and a pepperoni with tomato, pepperoni, parmesan and pickled chiles. Two salads are also available, the "Big Caesar" with kale and a house starring frisee and fresh herbs with vinaigrette.

One snack, pepperoni bites with ranch or marinara dipping sauce, is also in the menu.

We'll keep readers updated on opening day, which is expected to be in July. When the shop does open, visitors can expect wood-fired pizzas and natural wines sold in a hip, casual atmosphere.